The Choose Your Memories, TurkAegean, İstanbul is the New Cool, Coming Soon, and Safe Tourism TV advertising campaigns were broadcast across twenty countries in October and received 6,480 GRP. Eight different promotional films were broadcast across seventy-three countries and viewed 1.4 billion times in total. The GoTürkiye web site was visited by approximately 5 million individual visitors in October. 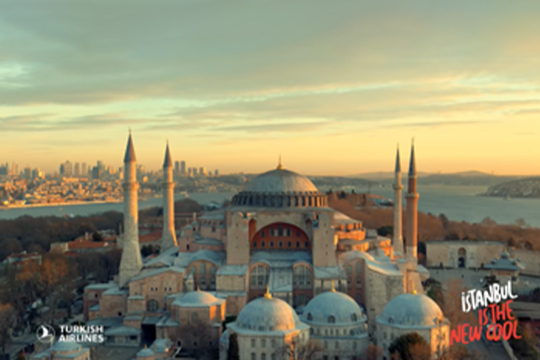 In October, a total of 745 visitors, of whom 132 were members of the media and 29 were influencers, were hosted at thirty-three events across twelve cities in Türkiye. The posts shared by visitors garnered sixty million views online.

An integral structure in Türkiye’s and the world’s collective cultural and artistic memory, the İstanbul Atatürk Cultural Centre (Atatürk Kültür Merkezi – AKM) reopened its doors on October 29, 2021. Fifty-five foreign press members and four opinion leaders from twenty-nine countries were hosted by the TGA between October 28 and November 1, as part of the AKM’s opening ceremony. The Atatürk Cultural Centre was opened by President Recep Tayyip Erdogan and Turkish Minister of Culture and Tourism, Mehmet Nuri Ersoy. 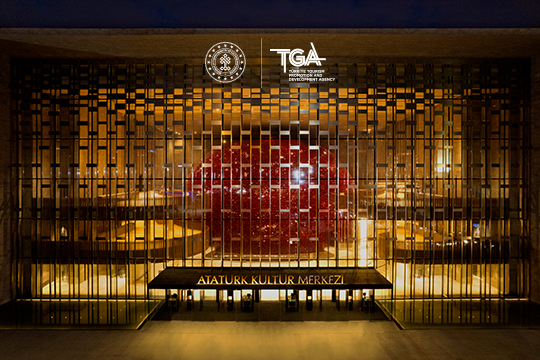 The Beyoğlu Culture Route Festival launched on October 30, featuring the participation of more than one thousand artists across 60 locations. Hosted by the TGA, fifty-five members of the foreign press and four opinion leaders, in İstanbul for the opening of the AKM, also visited and shared their experiences at locations along the festival route. 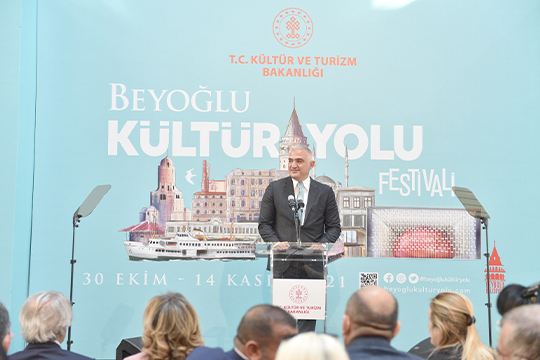 The London Philharmonic Orchestra and Chris Botti Perform at AKM 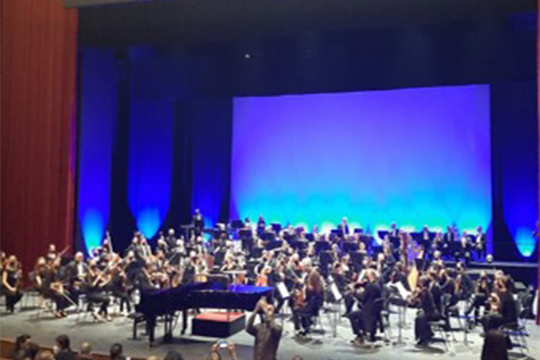 As part of the promotional support provided to the Contemporary İstanbul art fair, twenty press members from six countries were hosted in İstanbul between October 4 and 8. Members of the media visited important locations throughout İstanbul, including various art galleries, and were offered an opportunity to personally observe the city’s unique blend of modern and ancient textures. 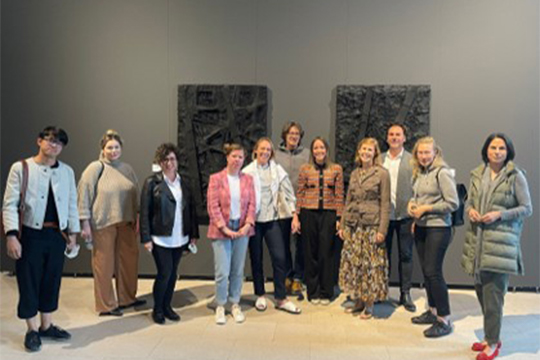 A FAM (Familiarisation) trip was organized and attended by Irish tour operators to promote destinations and hotels in and around Antalya. Supported entirely by the TGA, the event aimed to strengthen the region’s visibility in the Western European market. From October 6 to 10, thirteen Irish tour operators visited the region’s numerous historical and cultural sites and conducted promotional tours of hotels with high sales potential in the Irish market. 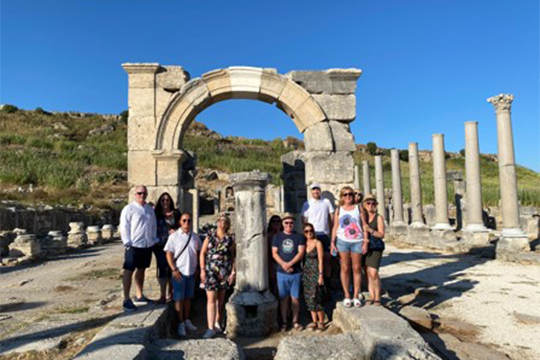 In October, the TGA hosted two globally prominent figures in İstanbul. French actor Samy Naceri, who starred in the French action film series Taxi, was a guest of the TGA from October 7 to 13. The famous actor posted frequent updates from his trip on social media, introducing Istanbul to his fans. Malaysian model and actress Juliana Evans also visited İstanbul in October. Hosted from October 14 to 19, the actress, along with her team, was in the city within the scope of İstanbul Fashion Week, as well as the “İstanbul is the New Cool” campaign setup. Evans also shot the autumn catalogue of her jewellery line in İstanbul. A FAM Trip was held to introduce Edirne, Tekirdağ and the surrounding destinations to tour operators from the Balkans. Taking place from October 20 to 24, the event was planned in its entirety by TGA. With a group of ten tour operators from Serbia, Bulgaria, and Bosnia and Herzegovina, the trip aimed to strengthen the region’s visibility in the European market. 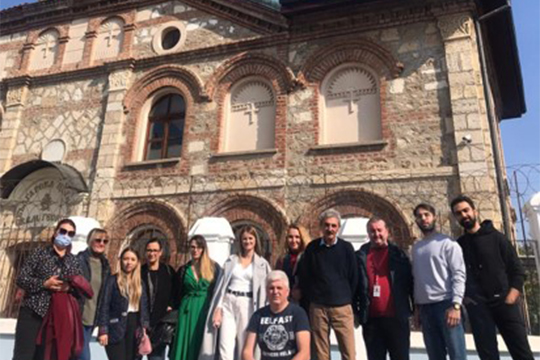 The launch of the Gelibolu Historic Underwater Park was held on Saturday, October 2 at Seddülbahir Castle, with the participation of Deputy Minister of Culture and Tourism Nadir Alpaslan. At the invitation of the TGA, eight foreign media members, and influencers were present at the event. Formula 1, the worldwide motorsport event reaching two billion people, took place in İstanbul Park between October 8 and 10. During the three-day event, approximately 100,000 spectators attended the races, which included the twenty fastest drivers in the world. Twenty-three members of the press and ten influencers from eleven countries, including England, Germany, the Netherlands, and Ireland, were hosted by the TGA during the event. 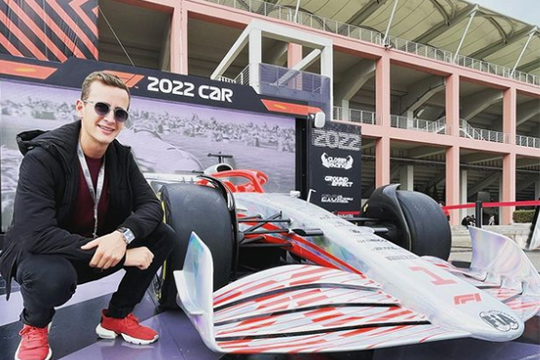 Yacht Racing in the Bosphorus

The second segment of the 2nd Presidential International Yacht Race was held in İstanbul from October 29 to 31; the first segment took place during the summer. The winner of the three-day regatta and the Presidential Cup was the vessel, Wings of Oz, helmed by Tora Sebahattin Kutoğlu. A total of twenty-two people, including fourteen foreign press members and eight influencers, who came from abroad at the invitation of the TGA, followed the event and posted updates on social media. More than 2,400 foreign competitors from seventy countries participated in the Cappadocia Ultra Trail, which is the only event on the Ultra Trail World Tour calendar to be held in Türkiye. High interest in the event, which was held on October 16 and 17, resulted in a one-hundred percent occupancy rate for hotels in Ürgüp. Foreign press and opinion leaders were hosted by the TGA for the event, while additional promotional support was provided from the GoTürkiye social media accounts. 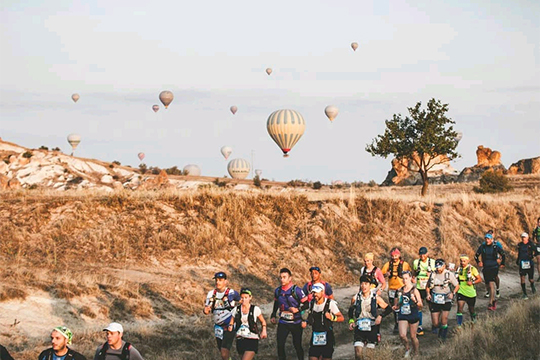 The Ironman, the international triathlon event, was held in Belek on October 31, with the participation of more than 2,200 athletes from eighty-five countries. While many of the facilities in the region were full, there was a twenty percent increase in international participation compared to last year. The event’s officials and prominent foreign guests in the international triathlon community were hosted by the TGA. In addition, digital communication support was provided to the organization from the GoTürkiye social media accounts, while the GoTürkiye.com branding was highly visible both along the course, as well as at the starting and finishing points. The Bodrum Cup Yacht Race, held from October 18 to 31, attracted even more attention this year. Participants enjoyed a range of programs both at sea and on land, including concerts and events such as the Blue Travel Kitchen Cooking Competition. The race has been an annual tradition since 1989 and was supported by the TGA, which also hosted the media.

Türkiye is a Guest of Honour in Cannes

In October, the TGA participated in three international fairs and events. At the Cannes Tourism Fair on October 2 and 3, Türkiye was a Guest of Honour Country, with the Türkiye logo included in exhibition images throughout the city. In addition, one-to-one meetings with forty-two agencies were held at the Türkiye stand at TFest from October 2 to 6. TFest, the global gathering for luxury travel, was held in Dubai this year. From October 25 to 27, TGA attended the International Congress & Convention Association (ICCA) in Paris, where the directors of the associations organizing international congresses were introduced to Türkiye. 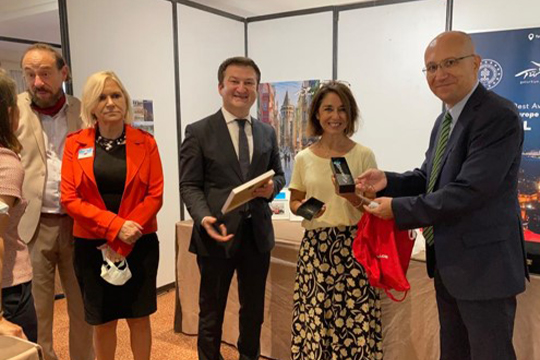 TGA is Selected for the Cruise and Port Cities Working Group

The Cruise and Port Cities Working Group, a joint effort launched by AIVP and MedCruise, includes twenty-four members from eight countries, including TGA, representing Türkiye. The WG aims to focus on sustainable port-city relationships and cruises by developing best practice guidelines in accordance with the experiences and challenges experienced by port cities of different geographies and scales. The WG also provides an opportunity for cooperation among port cities ranging from Canada to Egypt, as well as the embarkation destinations for cruise passengers.

Board Meetings with Provinces Continue

The 1st Board Meetings were held with the Balıkesir, Çanakkale, Erzurum, Isparta, Giresun, Muğla, and Ordu provinces, which completed protocol signing processes under the Provincial Promotion and Development Program; this Program is designed to promote Türkiye’s provinces and sub-destinations more effectively nationally and internationally. Within the scope of the relevant protocol, the @gezsen Instagram accounts and tags for Adana and Çanakkale for local audiences and the @go accounts and tags for Adana, Balıkesir, Çanakkale for international audiences were launched, with content customized for the target audiences. 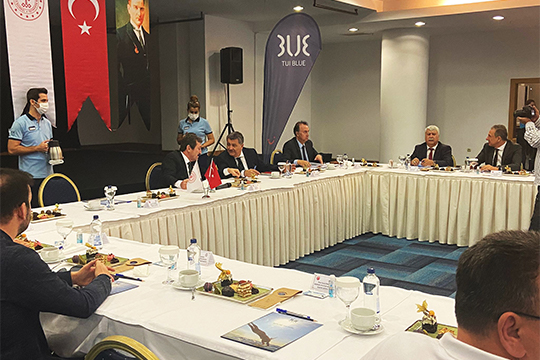 Within the scope of the Brand Provinces Efforts, advertising campaigns for the First Pilot Route (Çanakkale, Balıkesir, Trakya) in the target countries (Bulgaria, Greece, Romania, Ukraine, Moldova, Macedonia, Albania, Poland, Hungary, Serbia, Bosnia and Herzegovina, and Montenegro) went live in October. In other news, ten tour operators from Bulgaria, Serbia, and Bosnia and Herzegovina were provided with a tour of the Trakya Vineyard Route, covering the provinces of Edirne, Kırklareli and Tekirdağ, as part of the Pilot Provinces special hospitality and event program.