We have taken place on many different platforms this September. Our advertising campaigns such as Choose Your Memories, Turkaegean, İstanbul is the New Cool and Safe Tourism got screened in 21 country’s national televisions, in their own languages.  6 of our films reached 1 billion views in digital channels in 79 different countries. Our own digital platform Goturkiye has been viewed by 7,6 millions of single visitors in one month. 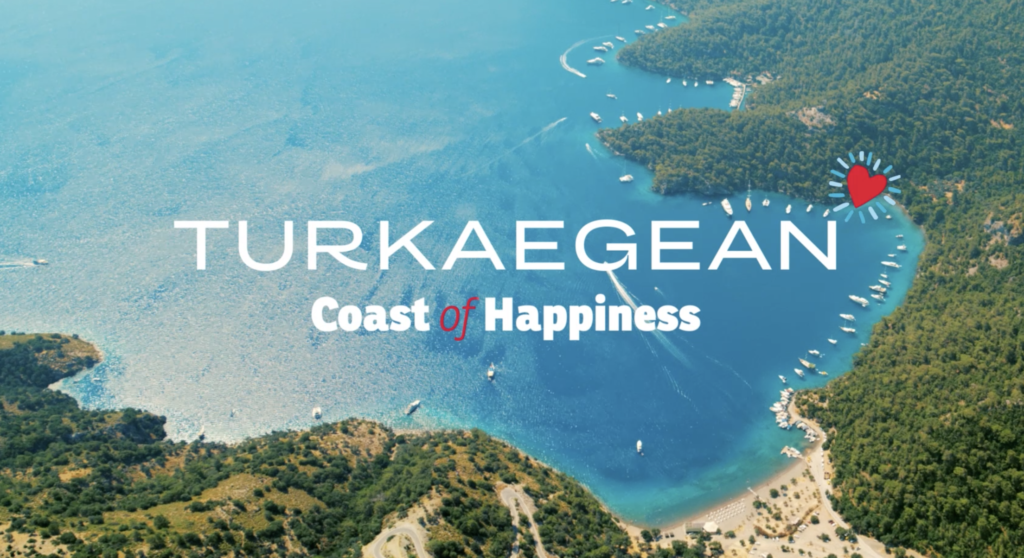 An official visit was made to Chisinau, the capital of Moldova, to attend the Türkiye-Moldova Tourism Joint Working Group Meeting on September 21. In addition to Mr. Nadir Alpaslan, our Deputy Minister, the meeting was attended by Deputy Minister of Publicity Onur Gözet and Kiev Culture and Promotion Counsellor Berat Yıldız, Deputy General Manager of the General Directorate of Investments and Enterprises Emin Özkan, Deputy General Manager of the Tourism Promotion and Development Agency of Türkiye Elif Balcı Fisunoğlu, and Country Marketing Director Burç Tutanç. Coordinator of the Bilateral Relations Branch of the EU and Foreign Relations Directorate Gözde Şahin, and Culture and Tourism Specialist Canan Karaca also attended. During the visit, Mr. Nadir Alpaslan met with the Minister of Culture of Moldova, Mr. Sergiu Prodan. 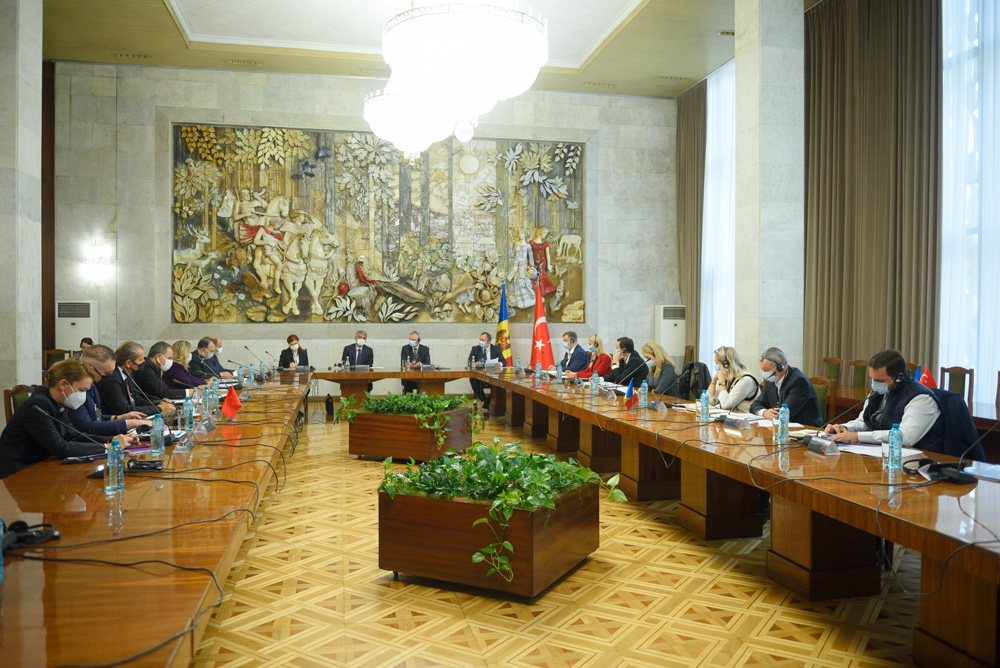 Elif Balcı Fisunoğlu, Deputy General Manager of the Tourism Promotion and Development Agency of Türkiye, and Burç Tutanç, Country Marketing Director, attended the First Major Regional Tourism Forum Exhibition, held in Kyrgyzstan between September 26-27. The first day of the conference, titled “Joint Studies on the Development of Tourism in a New Environment”, featured a promotional tour and a folk-dance performance in the Osh city square. The first segment of the Forum included discussions on the tourism sector’s current situation and measures taken to improve tourism. During the second segment of the Forum, problems and solutions were proposed regarding the regional development of sustainable and green tourism and industry trends in new conditions. The Türkiye delegation provided presentations on the above subjects, as well as on “Marketing of Major Regions”, during the Forum’s third segment. 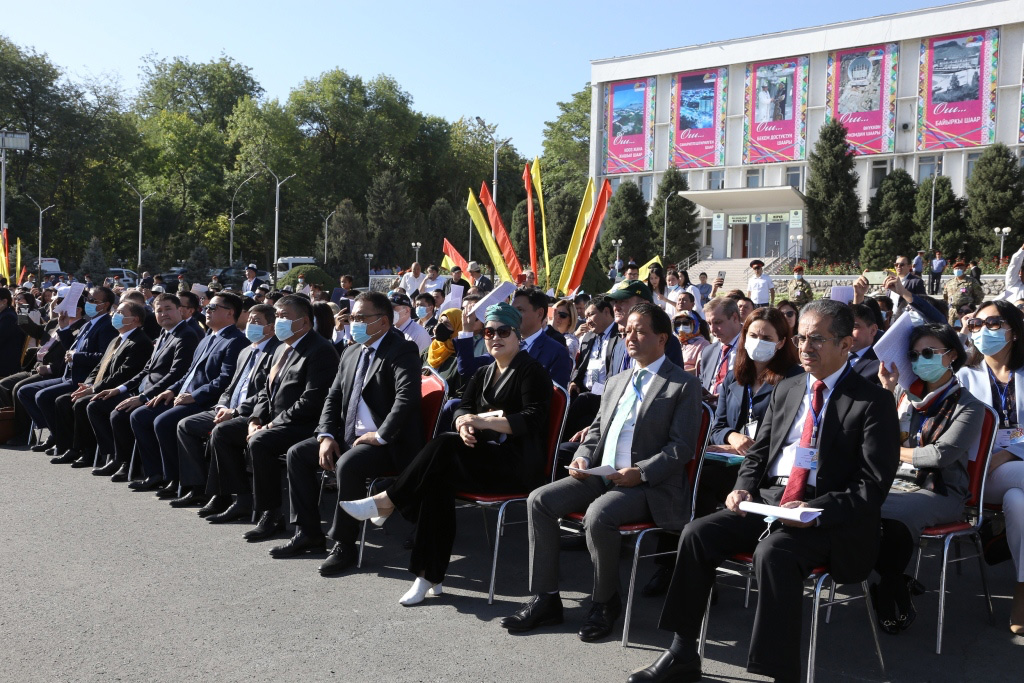 As part of the cooperation with Virtuoso, the leading global network of agencies specializing in luxury and experiential travel, the international Virtuoso travel consultants and tour operators participated in the 3rd Virtuoso Immersion Webinar. The webinar, introducing the UNESCO World Heritage sites and routes in our country, received great attention. Within the scope of our cooperation with Virtuoso, the first two of the 30-minute live online narrations organized this year were watched by more than 200 professional luxury segment travel consultants from 14 countries, including United States, Canada, and South America. In addition to two WEB15 trainings in 2021, a “Gastronomy in Türkiye” training is planned for members of the Virtuoso Culinary Community.

EU Healthy Gateways and MedCruise officials were invited to our country by Medcruise to conduct inspections at İstanbul Galataport and Kuşadası Ege Port, two of Türkiye’s most important cruise ports. The group was hosted between September 9-10 in cooperation with TGA, Galataport and Egeport. As a result of the successful inspections carried out by the authorities, the Greek Ministry of Tourism announced that, as of October 1, 2021, the borders of Greece will be opened to cruise ships entering and leaving the ports of İstanbul Galataport and Kuşadası Egeport, which have been demonstrated to comply with EU standards. 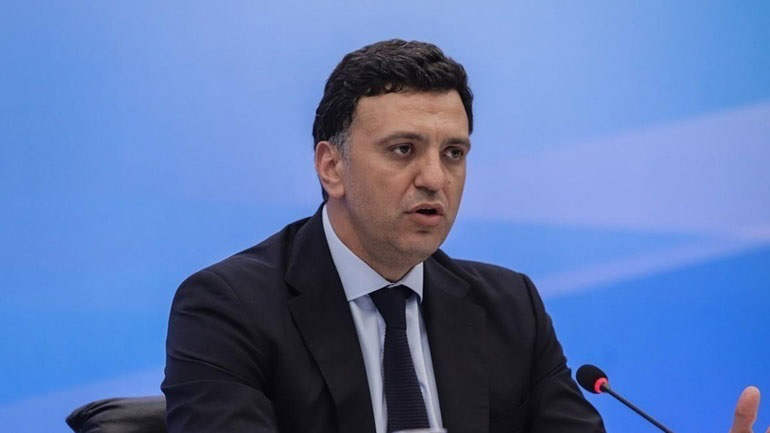 Velocity Lisbon, one of the most important bicycle industry events in the world, was organized in Lisbon from September 6 to 9 by the European Cycling Federation (ECF), of which we are a member. At our stand, information was provided about TGA, goturkiye.com and bicycle tourism activities in Türkiye (routes, international collaborations, Bicycle Friendly Accommodation Certification) to similar international bicycle and bicycle tourism institutions, especially the Eurovelo network. Bicycle route brochures, created and designed by TGA, were distributed to guests during the event. 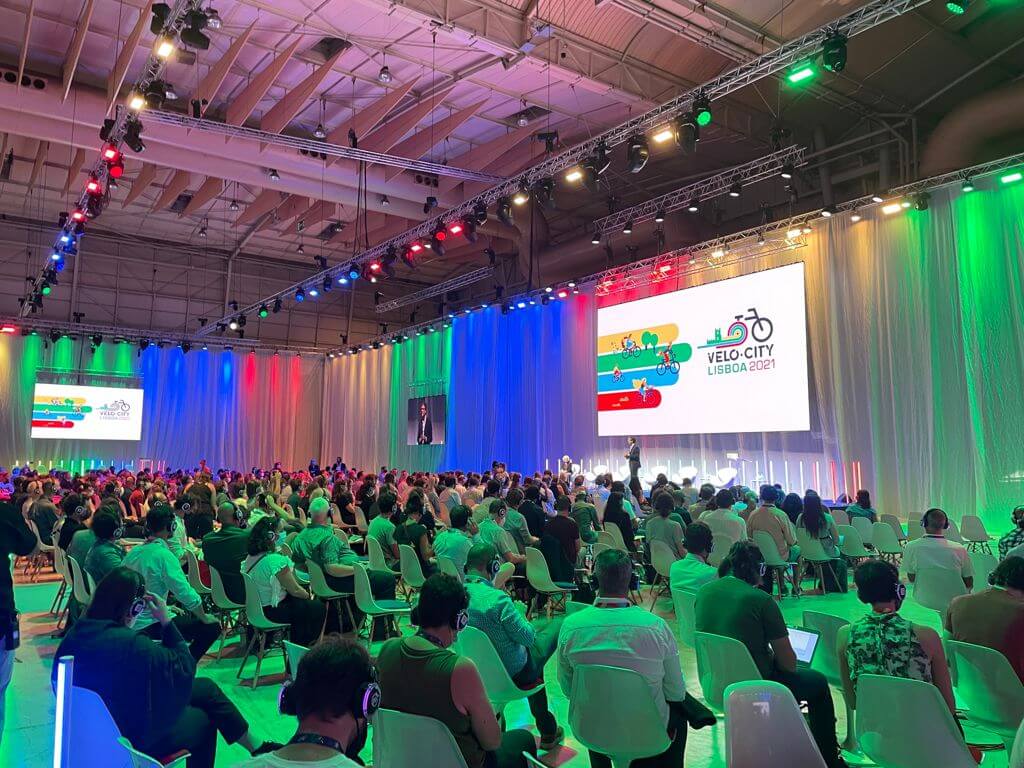 Within the scope of the agreement with the German Cycling Federation (BDR), the “Mountain bike or road bike in Cappadocia?” themed Instagram story and video posts were prepared. The content was shared on September 2 via the BDR Instagram account, which has 12,800 followers. 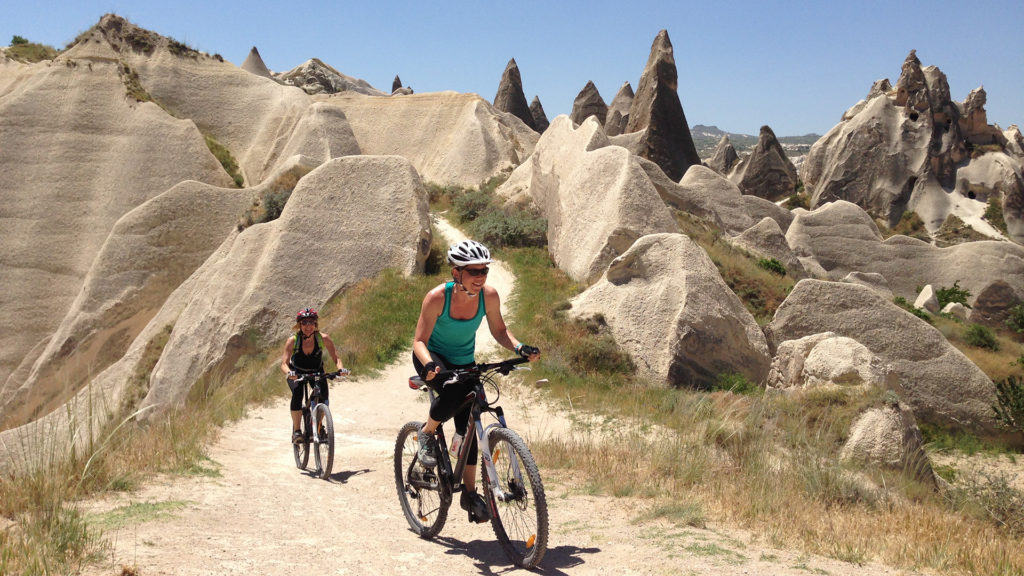 Hosted by TGA, German photographer and cyclist Marcus Kirchgessner and writer/editor Patricia Wohlgemuth set out from İstanbul for a 2,515-kilometre bike tour from the Black Sea coast to Ağrı. Kirchgessner shared his impressive photos from the route on his personal Instagram account. In the coming months, Kirchgessner and Wohlgemuth will release articles and photographs about their travels in Türkiye in adventure-themed magazines published in Germany.
Digital promotion work was carried out with 50 Best Discovery’s “The World’s 50 Best Restaurants”. The list is published annually and followed avidly in both the culinary and entertainment industries. After İstanbul and Bodrum, İzmir’s campaign launched in the “50 Best Discovery” section, where the best restaurants from around the world are introduced. Prominent travel writer Tristan Rutherford’s detailed article on the gastronomic richness of İzmir is available on the website.

Seventy foreign guests, including 56 foreign press members, 14 academics, and 71 members of the national press were welcomed at the launch of Taş Tepeler in Şanlıurfa, which dates from the Neolithic period,. 35 international academicians, speakers and listeners participated online at the Symposium, which was attended in person by the world’s leading archaeology professors as well as by representatives from museum and archaeology associations prominent in Neolithic studies.

The Taş Tepeler launch meeting was held in the garden of the Şanlıurfa Archaeological Museum. A press conference also took place at the Karahantepe excavation site with the participation of Minister of Culture and Tourism, Nuri Ersoy. The TGA organized the  symposiums, launch events, press conferences and programs focusing on the different sites, which were followed with interest by foreign and national press members. 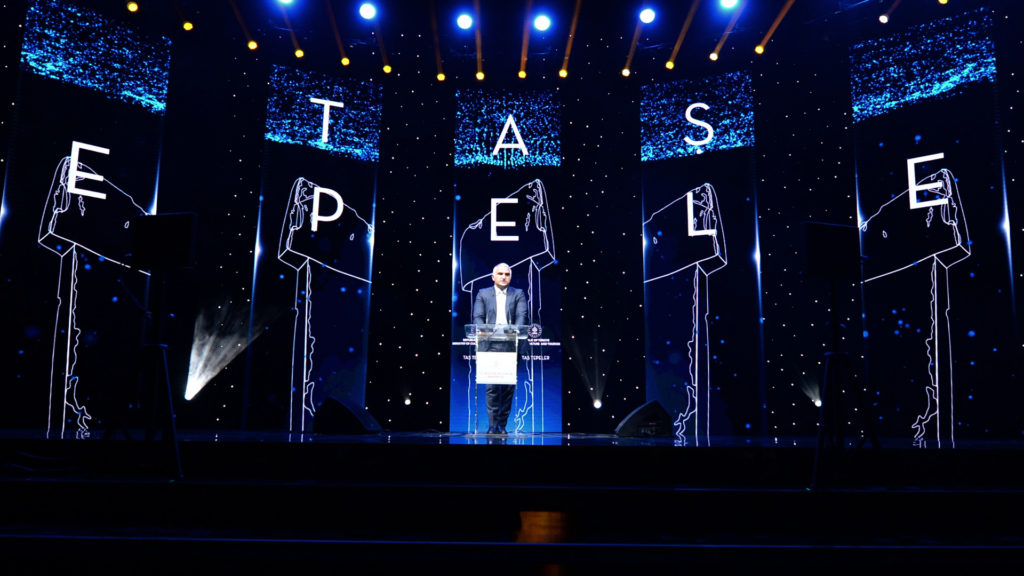 International promotional support was provided by the TGA  for the 20th anniversary of the Bosphorus Cup, held from September 23 to 26. One of the most prestigious sailing races in Europe, The Bosphorus Cup takes place on the Bosphorus Strait, flowing between the Asian and European continents. Featuring 51 vessels from eight categories in total, the race showcased Türkiye’s prominence as a setting for global events, contributing to promoting Istanbul as an international destination for foreign sailors. During the event, foreign sailors were welcomed with a banquet with a menu containing regional Turkish culinary specialities. The TransAnatolia Rally, ranked among the world’s top five rally-raid events, was held between September 11-18. Featuring a challenging 2,300-kilometre route from Eskisehir to Kars, the track links the historical and cultural values of Anatolia, while traversing through our country’s diverse climatic conditions. World-renowned racers from countries such as Italy, Spain and the Netherlands took part in the event, for which promotional support was provided by the TGA. Supported by the TGA, events such as the TransAnatolia Rally further expand Türkiye’s value for international sports organizations, as well as the wide range of tourism activities in our country. 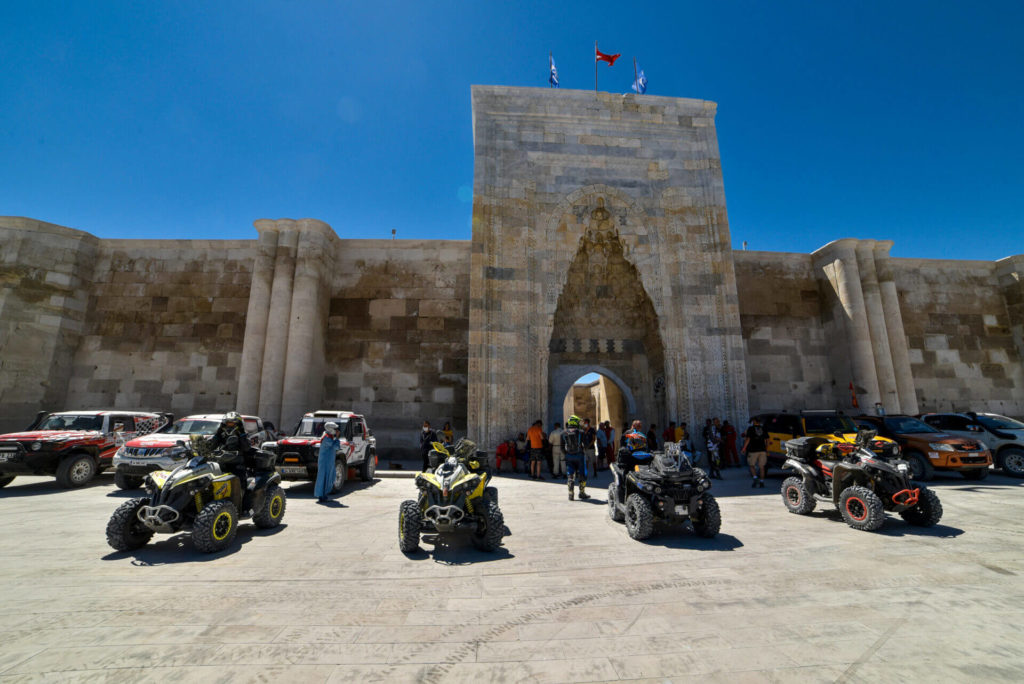 The Ministry of Culture and Tourism attended the TEKNOFEST Aviation, Space and Technology Festival, held between September 21-26 at Ataturk Airport. At the Ministry’s booth, attendees of all ages enjoyed the presentations, which included a virtual museum experience area with VR and a touchscreen console displaying UNESCO World Heritage sites. In addition, the booth drew visitors with featured applications such as Yeşilçam in the Phone, Art in Mobile, the Talking Library, Covidoscope, Göbeklitepe Racetrack, Tilt Brush, and Greenbox Photobooth.

Within the scope of the TEKNOFEST Technology competition, a tourism technologies contest was organized. The competition included software-oriented projects such as mobile and web software, as well as prototypes and educational games and simulations. 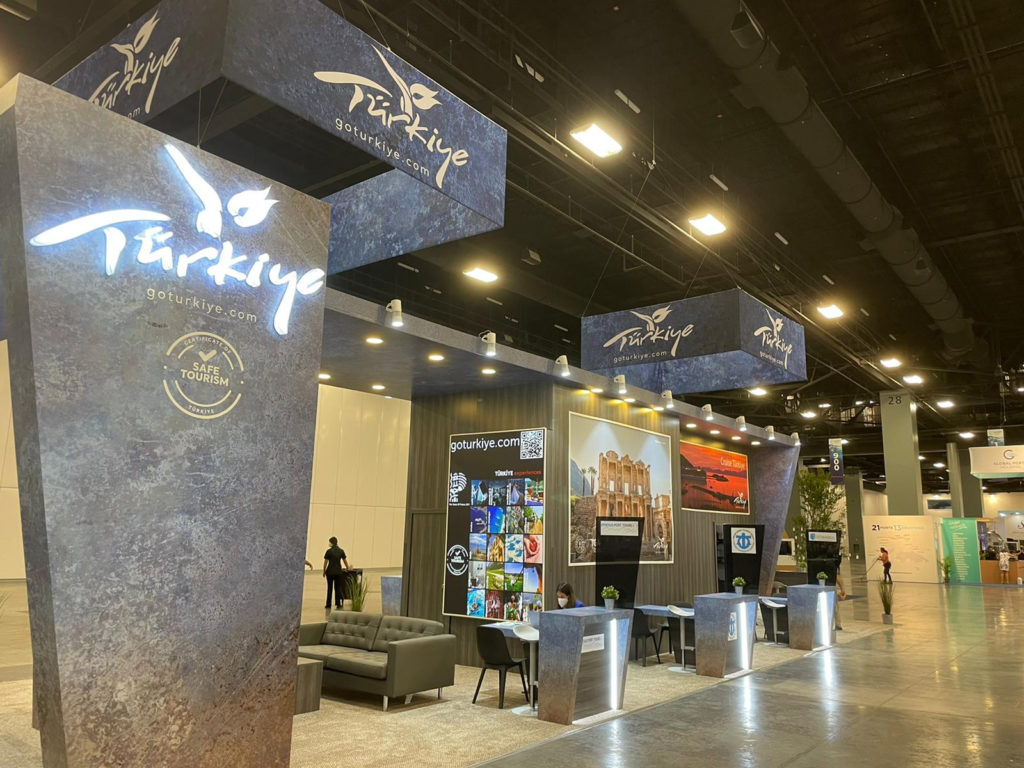 Türkiye was represented at the Seatrade Cruise Global event, held in Miami, USA between September 27-30. At the stand, Türkiye’s important cruise ports were introduced. In addition, information on the country’s major stops, particularly for routes hosting large cruise ships, was provided. These ports and their regions feature numerous historical sites and natural beauties.

Featuring the theme, “The Future of Cruising”, the Fair offered fertile ground to develop potential tourism opportunities. Türkiye’s effectiveness in cruise tourism was highlighted at the Fair, which followed emerging trends such as leading destinations in cruise tourism, technological innovations, and the evolving concepts of luxury and sustainability, as well as diversity, equality and inclusion.

A press conference was held in Istanbul for the soundtrack clip of the movie “Tiger-3”, filmed in Cappadocia, starring Salman Khan, one of India’s most prominent actors. Minister of Culture  and Tourism, Mehmet Nuri Ersoy attended the press conference, as did the movie’s lead, Salman Khan. With the support of the TGA, the clip was filmed in Cappadocia and aimed to further expand the cultural and touristic cooperation between India and Türkiye, as well as to promote the Cappadocia region in the Indian market. The event had coverage in the Indian press.
Türkiye welcomed 34 tour operators from Germany, who visited hotels in the southern region during events held in İzmir between September 9-12 and in Antalya between September 15-19 to promote destinations and hotels in the İzmir and Antalya provinces. The visit was aimed to further strengthen the promotion of İzmir and Antalya regions, especially in the Central European market.

As a  part of the TurkAegean Project, the Tasting Alaçatı event was held between September 9-12. Tasting Alaçatı aims to promote the Aegean region and its assets, including vineyards, olive oils and gastronomy. Content shared by “influencers” from England and Cyprus reached 5.7 million people in total.

Within the scope of the same project, 16 “influencers” from France, Switzerland and Belgium were hosted in İzmir, Foça, Urla and Çeşme between September 24-28. Content from guests who presented their different experiences reached 2.2 million people in total.

Within the scope of the ‘Share the Moment’ campaign, which aims to promote destinations in Fethiye and Göcek, an event was held between September 16-20 with the participation of 11 “influencers” from Germany and the Netherlands. During the three-day event, which took place in Fethiye, Göcek and Dalyan, guests enjoyed a Blue Cruise, nature walks, gastronomic experiences and cultural trips. Content produced by “influencers” throughout the event reached a total of 1.4 million people.

The “Provincial Promotion and Development Program” was launched to ensure more effective promotion of provinces and sub-destinations in the national and international arena. The new Board meetings implemented within the scope of the program were held in Bolu, Adana, Balıkesir, Çanakkale, Kars, Ordu, Konya, Erzurum, Tekirdağ, Edirne, Kırklareli and Isparta, respectively.Within the scope of the work initiated to develop a sustainable cooperation model, opinions were expressed regarding the active involvement of all tourism stakeholders in provinces that have popular travel destinations. In the meetings, where the basic strategic approaches regarding the branding of the provinces were communicated, feedback from participating individual stakeholders was heard and ideas exchanged on the working principles. Following the pilot provinces selected in the first stage for the Provincial Promotion and Development Board working model, which is planned to be implemented for all 81 provinces, Board meetings will continue with other provinces.