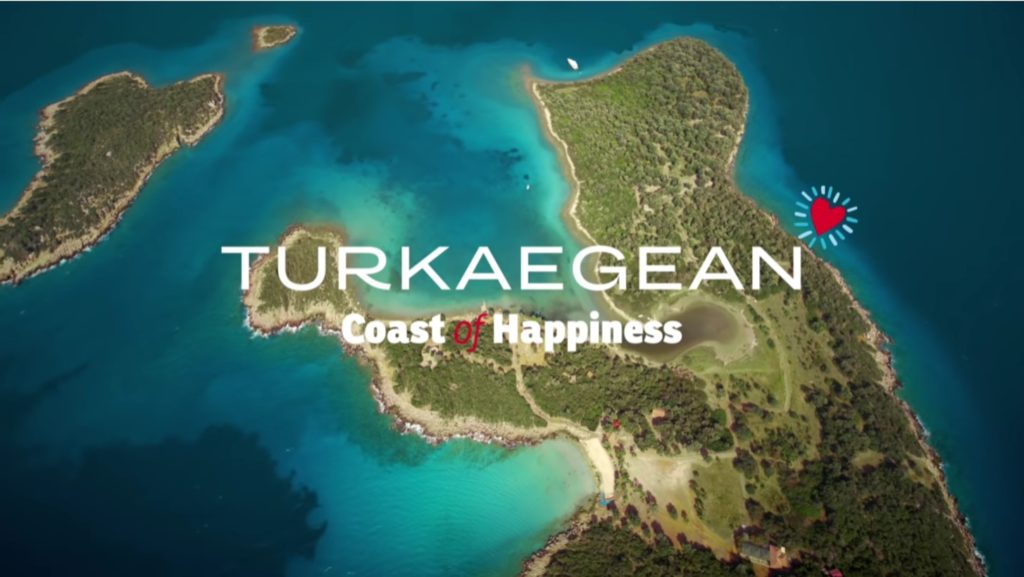 In April, TGA welcomed a total of 322 people

In April, the TGA invited a total of 322 people to 37 events organized in 16 cities of Türkiye. The 322 visitors came from 35 different countries; of them, 131 were press members and 17 were influencers. The highlights of the events held throughout April are as follows:

İstanbul joins the Michelin Guide family
Dining in İstanbul offers a wide variety, from the most delicious traditional and modern Turkish dishes to leading international restaurants and world cuisines. Appropriately, ‘Gastrocity İstanbul’ has joined the Michelin Guide family. At the press conference held at the AKM, Mehmet Nuri Ersoy, Minister of Culture and Tourism of the Republic of Türkiye, and Gwendal Poullennec, International Director of Michelin Guide, presented a detailed statement.  The restaurant selection prepared specifically for İstanbul by the Michelin Guide, which is considered the most prestigious restaurant rating system in the world, will be announced at a ceremony organized by Michelin on 11 October 2022. 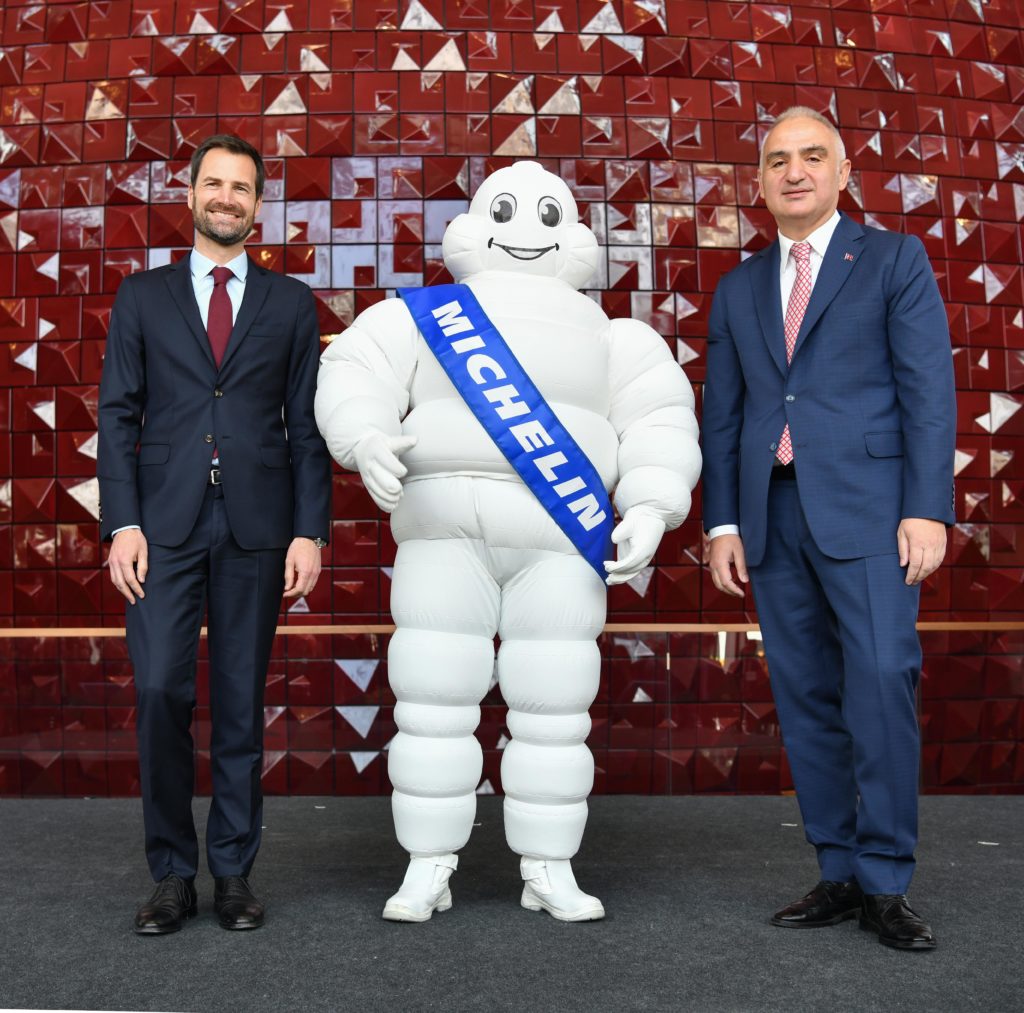 Direct flights between Antalya and Manchester start
To promote Turkish Airlines’ direct flights from Manchester to Antalya, which started in April, and to raise awareness around the Antalya destination, the TGA organized a visit for British press members. Within the scope of the organization, five members of the British press had the opportunity to tour the historical and cultural areas of Antalya and its surroundings. 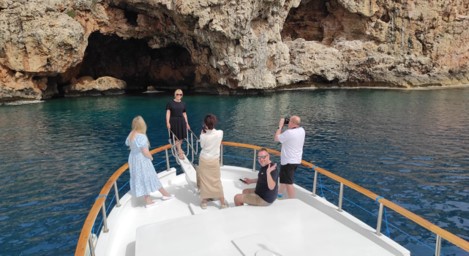 The family vacation theme introduced to the British

Jane Justin Hamilton, editor of The Sun newspaper, one of the leading publications in the UK, and Daragh Keany, editor of The Sunday World newspaper, a leading publication in Ireland, were hosted in Antalya in April. The editors, together with their families, were welcomed in order to further promote the theme of the “Family Trip.”  Both editors and their families also had the opportunity to visit historical and tourist sites in Antalya. A group of golf tourism agencies was hosted in Antalya between 4-8 April to promote the country’s golfing facilities and the sport of golf, which is one of Türkiye’s major sports tourism activities. The agencies, focused in the UK and Danish markets, received detailed information about golf courses in the region. 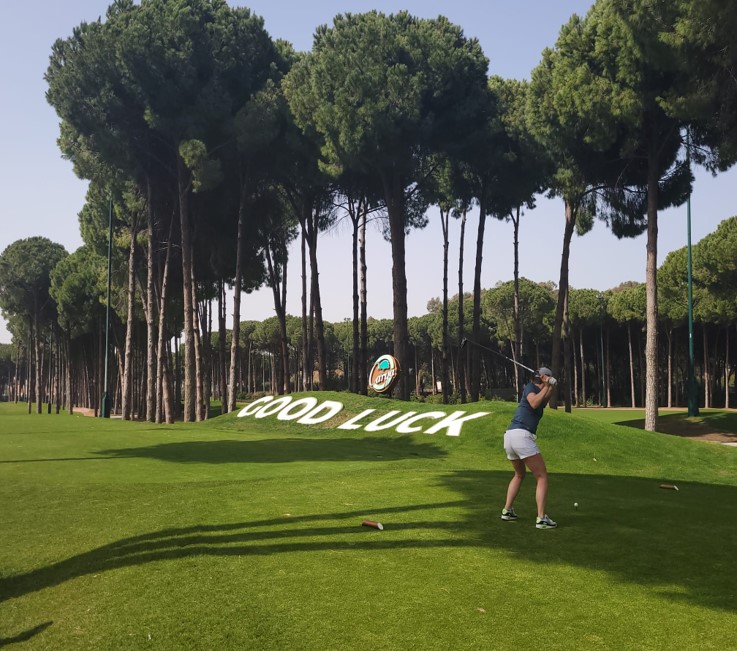 Members of the Board of Directors of the Association of French Travel Companies (EDV) and the Confederation of Spanish Travel Agents Association (CEAV) were hosted in İstanbul during in April in separate visits. French and Spanish guests hosted by TGA experienced İstanbul’s culture, art and gastronomy while holding Board meetings in the city. Both groups gave interviews to Anadolu Agency. 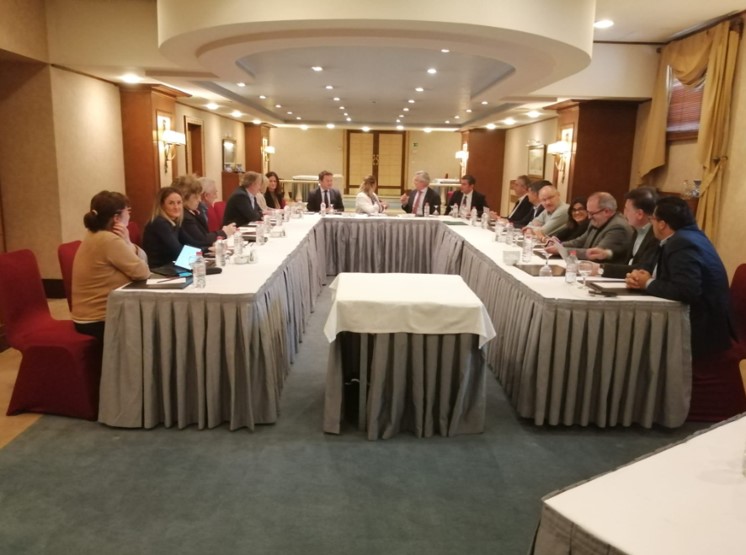 The potential of wedding tourism introduced to the Gulf countries

A wedding organization and media group of 13 people from the Gulf countries, including Lebanon, Bahrain, Dubai, Abu Dhabi, and Oman, were hosted by TGA and Vivaah Weddings (Dubai) in İstanbul and Cappadocia between 11-17 April 2022. Visitors were introduced to the destinations as well as the hotels and event venues in each region and were also provided with extensive information related to destination weddings. 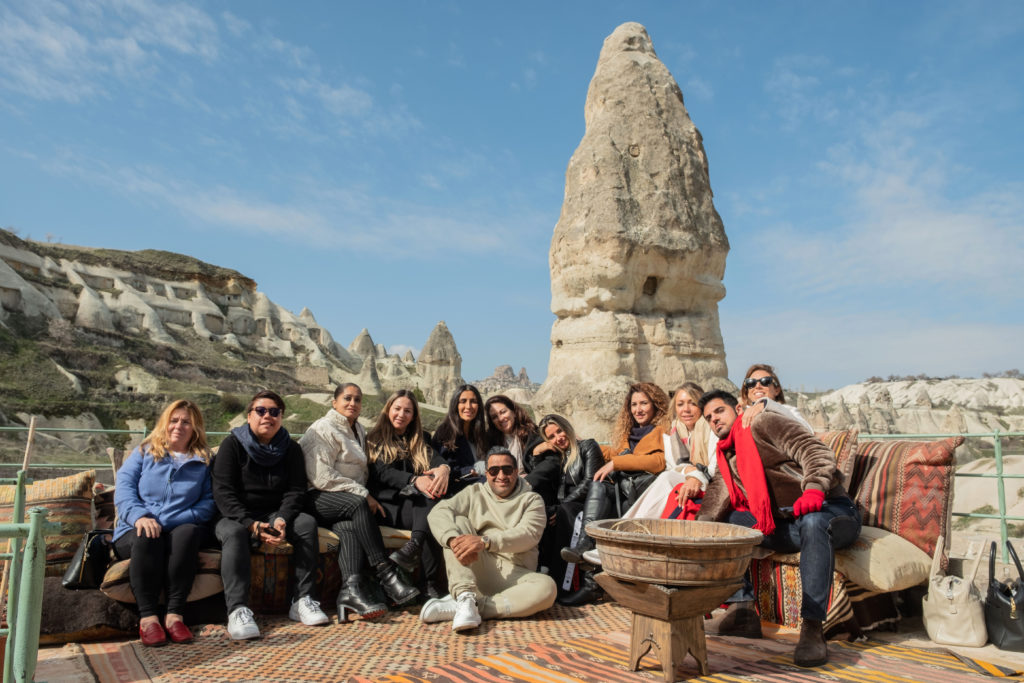 Six food writers from Belgium, Israel, Poland, England, Sweden, and Brazil were hosted on a gastronomy tour in İstanbul, İzmir and Muğla, within the scope of promotional activities to raise awareness of Turkish cuisine on an international scale. As part of the visit, guests were able to dine on both  classic and modern Turkish cuisine in distinguished restaurants while meeting with Michelin-starred chef Alex Atala. Channel 12, one of Israel’s leading TV channels, filmed in İstanbul and Antalya for a special report. Hosted by TGA between 18-20 April, the three-person crew included historical and touristic sites in the program and interviewed various authorities. 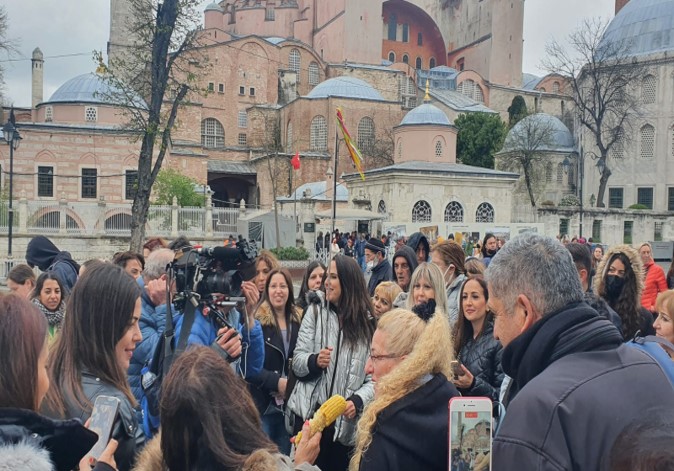 Fashion shoots were held in Cappadocia for the German issue of Elle magazine, one of the world’s leading fashion publications. The eight-person team conducted photo shoots, organized by the TGA between 23-27 March, in Nevşehir-Cappadocia. 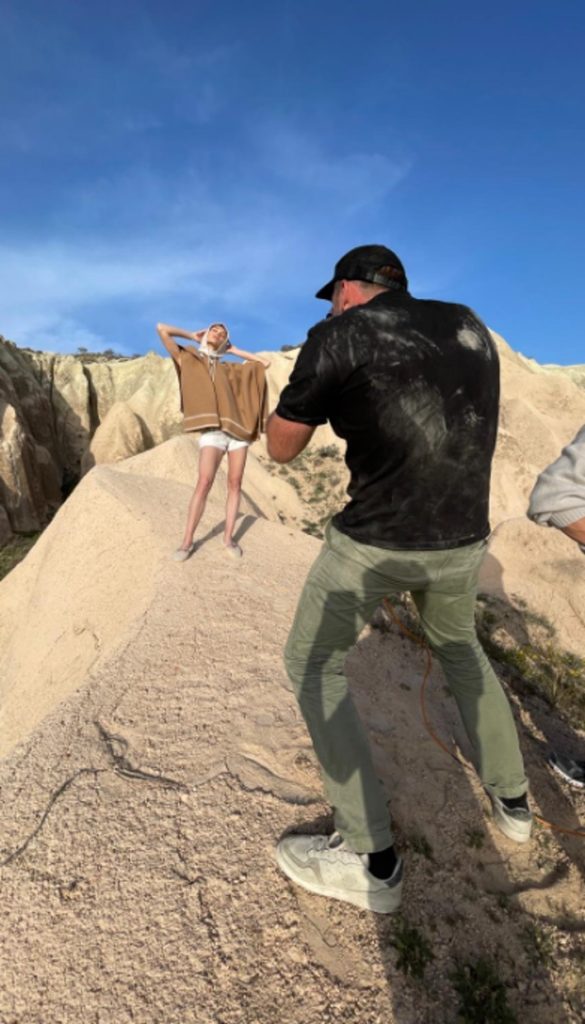 Joe Yogerst, a writer for National Geographic, a prominent United States-based publication, was hosted at an event organized to spotlight the culture, artistic and gastronomy aspects of İstanbul. Yogerst, who visited several museums within the scope of the event, also went on a boat tour of the Bosphorus and learned about its structures, whose stories have been told from the past to the present. Yogerst also enjoyed Turkish cuisine during his visit. 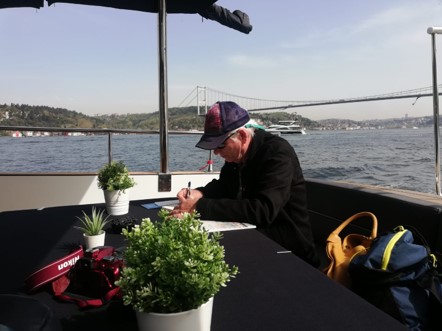 Turkish Riviera introduced to a group of 14 influencers

The Turkish Riviera influencer event, which aims to promote all tourism products in Antalya as well as the Mediterranean region, took place between 25-29 April with the participation of a group of 14 influencers from France, Switzerland, England, and the Netherlands; together, they have a total of 2.4 million followers. The influencer group produced content from a range of different activities and programs during their three-day visit, which included sporting activities as well as city tours and cultural trips. 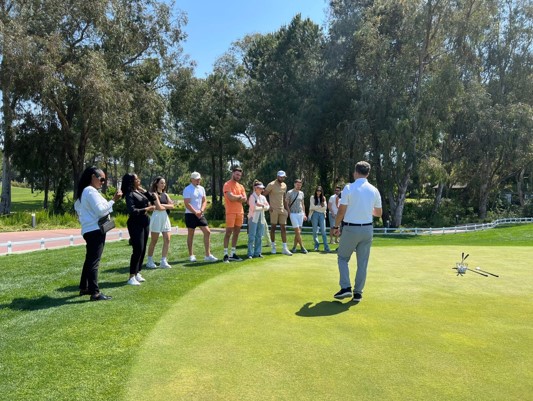 Wings of the East in Diyarbakır

The Wings of the East program, organized to highlight the important figures who shaped the Anatolian civilization and culture to new and future generations, was held in Diyarbakır between 27 April and 1 May. Within the scope of the event, 12 press members from Azerbaijan, Uzbekistan, Kazakhstan, Kyrgyzstan, North Macedonia, and Kosovo were hosted in Diyarbakır for three days and participated in various activities.

World-renowned Canadian Chef Anna Olson and her husband, the academician chef Michael Olson, were hosted by TGA between 30 April and 4 May in İstanbul. Olson, who sampled numerous flavours in İstanbul – from spices to street delicacies and from fine dining to traditional desserts – will feature the recipes she learned during the visit on her show in Canada and on her YouTube channel. Cycling the North Aegean in Tour of Türkiye

Aiming to promote cycling and cycling routes in Türkiye, the Tour of Türkiye took place along a route spanning Bodrum, Aydın, Manisa, Balıkesir, Çanakkale and İstanbul between 8-18 April, with the participation of a six-person press group from Spain, Netherlands, Norway, Germany, and France. Foreign guests hosted by the TGA followed the bike race and also experienced cycling routes in the cities along the Tour. 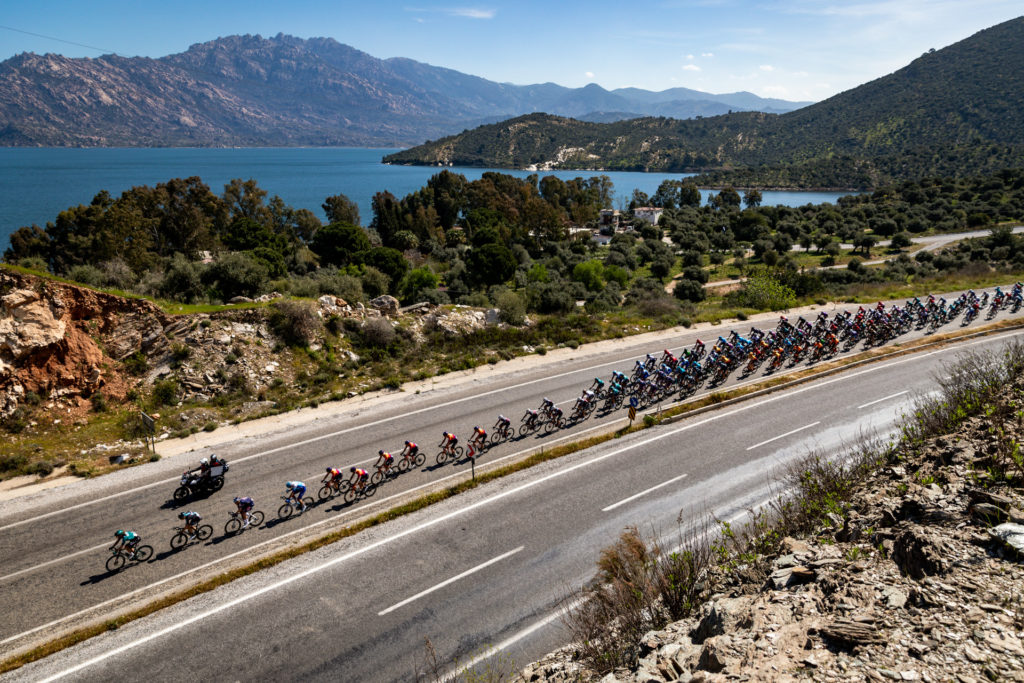 Held in Mallorca between 7-8 April, the Sustainable Destinations Summit was organized by the United Nations World Tourism Organization (UNWTO). At the Summit, TGA Deputy General Manager Elif Balcı Füsunoğlu participated as a speaker in the Circular Economy panel, discussing her presentation titled “Circular Economy: The Green Transformation of the Tourism Industry and Destinations.”