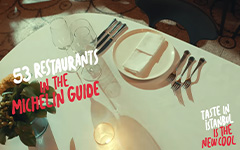 In thirty events organized across 21 cities in Türkiye, the Türkiye Tourism Promotion and Development Agency (TGA) hosted 367 people from 38 countries, of whom 346 were press members and influencers, and opinion leaders and 21 tour operators. The highlights of December’s hospitality events and other organizations are listed below:

Journalists from the Turkic Republics enjoy nature in the Western Black Sea region
Journalists who came to Türkiye from Azerbaijan and Uzbekistan at the invitation of TGA, visited the Western Black Sea region between 28 November and 1 December. The guest journalists enjoyed a program covering various points in Bolu, Karabük, Kastamonu and İstanbul, touring the region’s natural, historical and cultural sites. 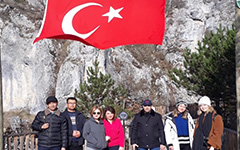 Foreign press members experience health tourism in Türkiye
TGA invited journalists to experience Türkiye’s thermal facilities and health clubs during a spa-and wellness-themed program. From 28 November to 1 December, the group of journalists from Sweden, Norway and Denmark were hosted in İstanbul and Sakarya. The second group of press members, from Uzbekistan, Kyrgyzstan and Saudi Arabia, were hosted in İstanbul, Sakarya and Yalova between 19-22 December. The groups participated in different health activities offered by the programs and also enjoyed the calm and green nature of the regions where the facilities were located. Italian tour operators discover Şanlıurfa, Adıyaman and Gaziantep
TGA hosted Italy’s leading tour operators in Southeastern Anatolia between November 28 and December 2. The group visited many different historical, natural and cultural sites in Şanlıurfa, Adıyaman and Gaziantep within the scope of the program, which was specifically prepared for them. Guests also experienced the famous tastes of Southeastern Anatolian cuisine. 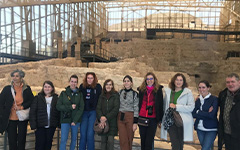 Eastern European journalists explore Central Anatolian cities
Members of the European press visited Türkiye as guests of TGA between 28 November and 2 December. Hosted in Ankara, Çankırı and Kırıkkale, guest journalists from Serbia, Bosnia and Herzegovina, Romania and Bulgaria experienced different aspects of each city within the scope of the hospitality program. The group toured important museums in Ankara, as well as the Salt Cave (Tuz Mağarası) and Çankırı Castle in Çankırı. They also visited the historical bazaar, the Adventure Park (Macera Parkı) and Fairy Chimneys (Peribacaları) in Kırıkkale, the last stop in the program. 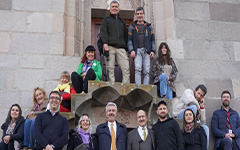 Bollywood cinema taps İstanbul and Antalya for filming locations
TGA, in cooperation with the General Directorate of Cinema, invited senior executives from important India-Bollywood production companies to Türkiye. The guests, who were hosted in İstanbul and Antalya between December 2-7, visited areas suitable for series and film locations. The guests were also informed regarding filming regulations in Türkiye, the necessary permissions and other issues. 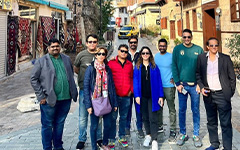 Daily activities of East Asian visitors to Türkiye closely followed
Influential names in Japanese and South Korean social media were hosted by TGA in Mardin and İstanbul between 4-9 December. Within the scope of the hospitality program, prepared to highlight the historical and cultural richness and gastronomic values of both cities, the guest influencers visited various sites and enjoyed delicious examples of Turkish cuisine. Latvian tour operators travel Eastern Anatolia and Black Sea route
Latvia’s leading tour operators, who came to Türkiye at the invitation of TGA, were hosted in Black Sea and Eastern Anatolian cities between December 7-15. Within the scope of the program, prepared so that the group could fully experience the touristic potential of both regions, the guests visited many natural, historical and cultural sites in and around Trabzon, Rize and Erzurum and participated in various activities. The tour operators also dined on special dishes from Black Sea and Anatolian cuisine European journalists hosted on the Hatay, Gaziantep and Şanlıurfa Mosaic Route
A group of press members, visiting Türkiye from Spain, France, Portugal, Greece and Moldova within the scope of an invitation from the TGA, were hosted in Hatay, Gaziantep and Şanlıurfa between 12-16 December. The journalists visited many historical and cultural sites in the Southeastern Anatolia Region, especially the mosaic museums, which attract great interest from local and foreign tourists. The group also examined the rare collections exhibited in the Hatay, Zeugma and Hapellibahçe Mosaic Museums within the scope of the program and visited Göbeklitepe, which has been included in the UNESCO World Heritage List since 2018 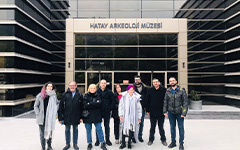 İstanbul welcomes foreign journalists and influencers with fashion and cultural riches
TGA hosted press members and influencers invited to Türkiye from the USA, Italy and France with a program focused on fashion, culture-art and gastronomy and themed ‘Iconic İstanbul’. The 14-person group, hosted in İstanbul between 12-17 December, visited various places showing the historical and modern face of İstanbul and enjoyed experiences unique to İstanbul related to culture, art, fashion and gastronomy. During their visit to İstanbul, guest journalists and influencers also had one-on-one meetings with the most successful fashion designers in their fields. Intense interest from world press in the Şeb-i Arus Mevlana Commemoration Ceremony
TGA invited a press and influencer group of 31 people to Türkiye within the scope of the 749th Vuslat Anniversary International Commemoration Ceremonies of Hazrat Mevlana, which were held in Konya. The group, which included guests from countries such as Israel, France, Italy, Germany, Azerbaijan, Uzbekistan, Serbia, Japan, Indonesia and Dubai, attended the ceremonies in Konya between December 15-19 and participated in various activities during the hosting, visiting many of the historical and cultural sites of Konya 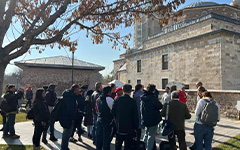 European influencers enjoy winter sports in Kayseri
TGA invited Europe’s prominent names in social media to Türkiye to experience winter sports in Anatolia. The group of 28 influencers, hosted between December 16-19 and coming from Spain, France, Poland, Germany, England, Romania, Bulgaria, Denmark and Serbia, experienced many different winter sports and activities from skiing to paraglading in Kayseri. The guests visited historically and culturally important sites in and around Kayseri, as well as in İstanbul, where they were also hosted. Members of the group produced content during their travels in Türkiye, which they shared via their social media accounts. 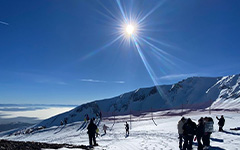 TGA attended the third ‘Tomorrow Tastes Mediterranean Conference’, organized in cooperation with the Culinary Institute of America and the University of Barcelona in Barcelona, Spain, between 30 November and 1 December. At the conference, held this year with the theme of ‘Biodiversity, Health and Mediterranean Cuisine’, the book Turkish Cuisine with Timeless Recipes was presented to the Library of the Department of Culinary Arts and Gastronomy of the University of Barcelona. During the event, TGA officials also held various meetings with the Culinary Institute of America on future collaborations Türkiye’s sustainability approaches in tourism explained at IBTM World Fair 2022
The IBTM World Fair, one of the most important international organizations for the meeting and event sector (MICE), was held in Barcelona, Spain between 29 November and 1 December 2022. During the Fair, visitors to the Türkiye promotion area were provided with information on the importance of our country in meeting and event tourism as well as the sustainable approaches implemented by the MICE sector and Türkiye 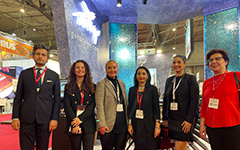 The TGA participated in the Sustainable Tourism Summit, held at Boğaziçi University between December 2-3. Leading figures in the tourism sector, academia, and provincial and sector associations also attended the Fair. TGA representatives, along with international destination representatives, participated in panels titled “Sustainable Destination Management” and “Sustainability Practices in Tourism Enterprises”, in which the TGA presented participants with Türkiye’s sustainable tourism approaches, and developments and innovations in sustainability studies specific to tourism enterprises 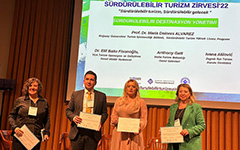 Information provided at ILTM Cannes regarding Türkiye’s place in the luxury tourism sector
The annual ILTM (International Luxury Travel Market) Cannes Fair in France is a leading platform for the world tourism sector. This year, the Fair took place between 6-8 December 2022. During the event, visitors were informed about the privileges offered by Türkiye, especially in the field of luxury tourism, and the potential in the field of promotion of Türkiye 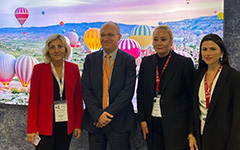 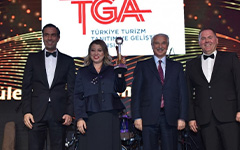 TGA attends UNWTO World Gastronomic Tourism Forum
The seventh edition of the Gastronomic Tourism World Forum, organized in cooperation with the United Nations World Tourism Organization (UNWTO) and the Basque Culinary Center (BCC), was held in Nara, Japan between December 12-15 this year. In this important forum, attended by the TGA, the governor of Nara, Shogo Arai, was presented with the book Turkish Cuisine with Timeless Recipes. During the Forum, business development and other meetings were held with attending participants from various countries 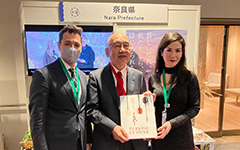 Important wedding organizers and media members of Europe, Middle East and Africa were in Türkiye
TGA invited leading wedding planners and media from Australia, United Arab Emirates, United Kingdom, Israel, Lebanon province and Egypt to Türkiye between 12-17 December 2022. Hosted in Istanbul and Cappadocia, the group toured various event venues for potential wedding organizations. In addition, examples of previous organizations were presented, along with the advantages and privileges of holding destination weddings in Türkiye A total of 324 meetings held to date