Digital impressions in May totalled 641 million In May, TGA welcomed a total of 977 people

In May, the TGA invited a total of 977 people to 45 events organized in 19 cities across Türkiye. The guests came from 47 countries; of these visitors, 156 were press members and 37 were influencers. The highlights of events held throughout May are as follows: 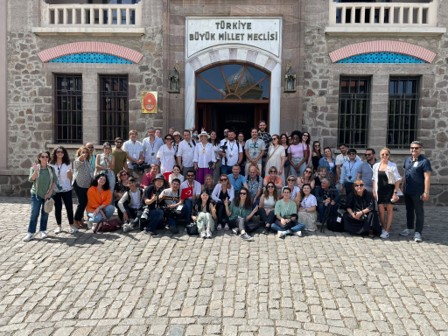 Turkish Cuisine Week starts in Balıkesir
Kitchen Week commenced in Balıkesir. The event aims to highlight Turkish cuisine and its sustainable and forward-thinking approach, which features quality materials, low- to zero-waste attributes, compliance with world nutrition trends, and a culture that spans millennia. The Balıkesir Gastronomy Festival, held between 20-22 May with the participation of the First Lady, Mrs. Emine Erdoğan and Minister of Culture and Tourism Mehmet Nuri Ersoy, was attended by members of the press, as well as opinion leaders, renowned Turkish chefs and Balıkesir residents. Turkish Cuisine introduced to the world

Within the scope of Turkish Cuisine Week, Turkish cuisine was introduced through various activities in the nations and cities in which the Ministry of Culture and Tourism operates Culture and Tourism consultancies. In addition, various events were held in our embassies. To support these domestic and international activities, the www.turkishcuisineweek.com and www. turkmutfagihaftasi.com websites were created. The sites feature visual materials designed for the event, including logos, posters, food videos and menu cards, as well as an “Istanbul menu” with a QR code.

Canada’s world-famous photographer Randy Van Der Staren travelled to Türkiye to work on his prestigious book, Take Your Seat. The volume consists of photographs with the theme of “The 100th Anniversary of the Republic of Türkiye”. Hosted by TGA between 4-13 May, a two-person team shot in Istanbul, Izmir, Trabzon and Ankara. 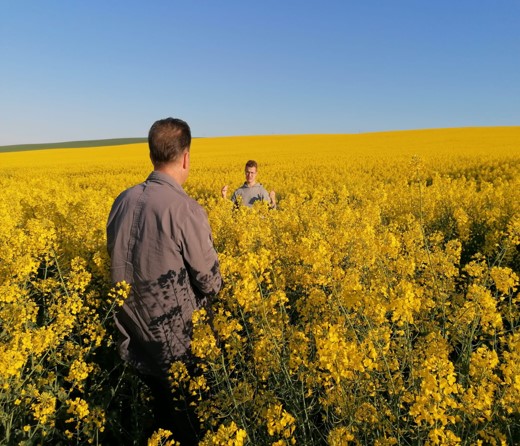 Within the scope of the TurkAegean campaign, a three-person team from the Swiss press, hosted by the TGA in Izmir, was introduced to the beautiful shores of the Aegean with a prepared program. Within the scope of various entertainment activities between 6-9 May, the Swiss guests were also provided with tours of Izmir’s cultural works and samples of its gastronomic products. Between 8-12 May, six members of the press, from England, Russia, India and France, were hosted in Istanbul for the opening of the Contemporary Istanbul Exhibition. During their stay, the press members visited Istanbul’s historical and cultural beauties of Istanbul and also viewed a select exhibition of contemporary art. Blue Cruises in the forefront at the TYBA Charter Show

Five members of the press, from Argentina, France and Belgium, were hosted by the TGA in Muğla and Istanbul for the International Yacht Charter Show (TYBA). The guests were offered an opportunity to experience the exhibited yachts while bringing the Blue Voyage cruise concept to the forefront. Representatives of Canada’s leading media organizations were hosted by the TGA in Istanbul and Muğla between 8-15 May. The Canadian media group of five people, hosted in cooperation with Turkish Airlines, visited historical and touristic sites in Istanbul and Muğla within the scope of the hospitality. They also sampled the local and regional cuisines. 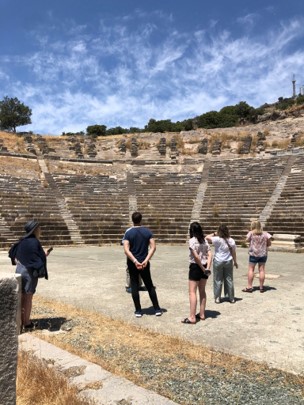 A group of 11 people from British agencies affiliated with Jet2Holidays, among the leading tour operators in the UK, was hosted by TGA in Antalya between 9-12 May. While promoting the Antalya destination within the framework of the hospitality, tour operators also conducted inspections of regional hotels. The event is expected to promote further tourism traffic in the Antalya region within the UK market. 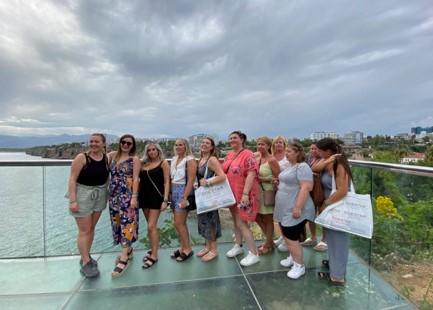 Antalya introduced in the Belgian and Dutch markets

Representatives of the Sunweb and Neckermann travel agencies, arriving in Türkiye from Belgium and the Netherlands, met in Antalya from 9 to 14 May. Within the scope of the hospitality, the 15-person group was given an in-depth introduction to Antalya’s historical, cultural and gastronomic products. 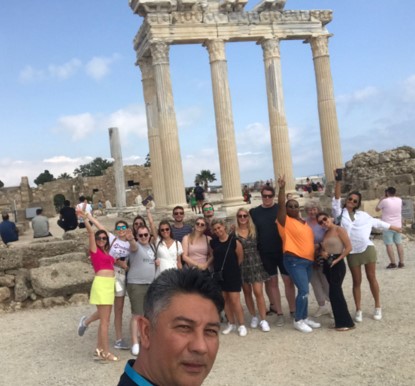 A group of three Swedish press members were hosted in Istanbul by TGA within the scope of the “Istanbul is the New Cool” campaign. During the event, which took place from 10 to 13 May, the group met with famous Turkish fashion designers and enjoyed special experiences in Istanbul’s important points in the fields of fashion, culture and art. A tour operator group, consisting of 35 members of the USA Tour Operators Association (USTOA), was hosted in Istanbul. During the event, the USTOA delegation met with the Minister of Culture and Tourism, Mehmet Nuri Ersoy, as well as with tourism stakeholders in Türkiye. The group visited important historical, cultural and touristic points in Istanbul and were also given a detailed tour of Galataport. Fifty tour operators from Germany, were hosted in Cappadocia by TGA between 11-15 May. The group, most of whom specialize in outdoor tourism, met with local hotels, agencies and restaurant representatives at a workshop organized within the scope of the event, and discussed potential tour organizations with local solution partners. The German tour operators also experienced the natural beauty of Cappadocia and the activities on offer. 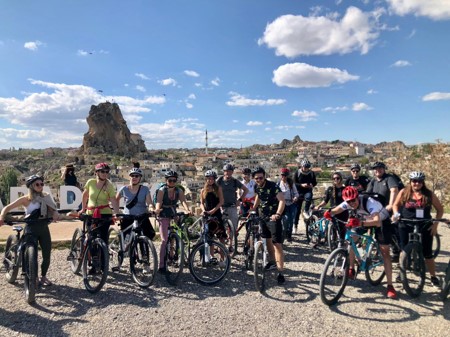 The photography crew from the world-famous Bulgarian Glamour magazine was hosted in Çanakkale between 13-17 May. In addition to deploying the historical themes of Çanakkale during the shoot, the publication’s team experienced the area’s finest local and regional cuisine. The Hasankeyf International Culture, Art, Sports and Gastronomy Festival took place between 19-22 May. Within the scope of the festival, 17 tour operators and photographers from North Macedonia, Bosnia and Herzegovina, Iraq, and Iran had the opportunity to experience the natural beauties of Batman amid the enthusiasm of the festival. The hospitality program held within the framework of the festival featured local delicacies that will receive geographical indications, as well as an introduction to Hasankeyf, which is fully prepared for tourism. 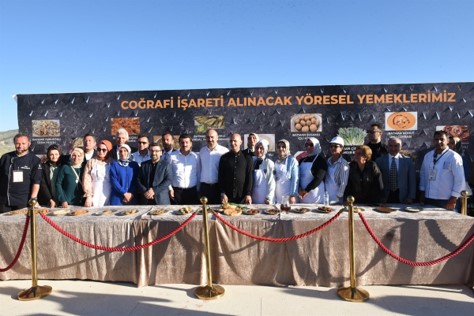 A Dutch press group of three people, hosted between 16-22 May, met with Turkish chefs in Türkiye’s most famous restaurants. During their stay, gastronomy writers had the opportunity to personally experience the special recipes included in the book Turkish Cuisine with Centennial Recipes, in Istanbul, Izmir and Gaziantep, while conducting interviews with Turkish chefs and visiting cultural and historical points in the three provinces. 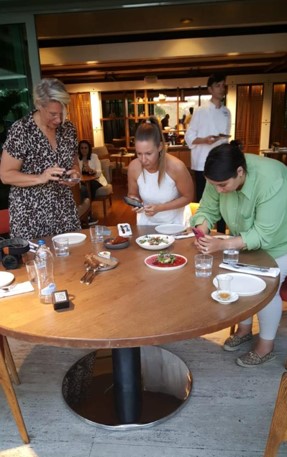 To participate in the TRT World Forum, a group of 30 influencers and opinion leaders from the USA, UK, Canada, Mexico and Qatar organized a trip to introduce Istanbul between 12-15 May. Within the scope of this hospitality, the group had the opportunity to discover the historical and cultural beauties of Istanbul, sharing information that supports the “Istanbul is the New Cool” campaign.

A team from TVN TV, one of the leading television channels in Poland, was hosted in Istanbul for the filming of a program about the city. The filming took place from 12 to 15 May, focusing on Istanbul’s historical and cultural heritage, its gastronomic treasures, and local experiences. In the hospitality event organized by TGA to support Türkiye’s marketing efforts in South America, a group of five journalists from Brazil’s leading publications were hosted in Istanbul, Nevşehir and Aksaray between 16-21 May. Within the scope of the event, the culture, art and gastronomy aspects of Istanbul, Nevşehir and Aksaray were highlighted. Israeli press members embarked on a historical journey in the Southeast To contribute to the international promotion of Turkish cuisine, two gastronomy writers from Ireland were hosted by TGA in Istanbul between 21-24 May. Within the scope of the hospitality program, the writers were introduced to Türkiye’s deep-rooted culinary history as well as the country’s contemporary flavours. The First Stage in the 3rd International Yacht Races of the Presidency of the Republic of Türkiye was held in Muğla. More than 40 sailing boats and over 400 athletes participated in the race this year. TGA hosted the members of the international yachting press specifically for the event, with events promoting Türkiye’s blue voyage routes and bays. Communications support for the event was provided via the GoTürkiye social media accounts. Türkiye’s first bicycle race encompassing both racing and holiday concepts, the International Santini Queens of the Aegean Boostrace, was held in Marmaris on 29 May with 300 athletes participating. More than 300 cyclists from over 13 countries, including the USA, Austria, England, France, Germany, Italy, Ukraine, Norway and Russia, participated in the race, while the TGA hosted international opinion leaders as part of the event. 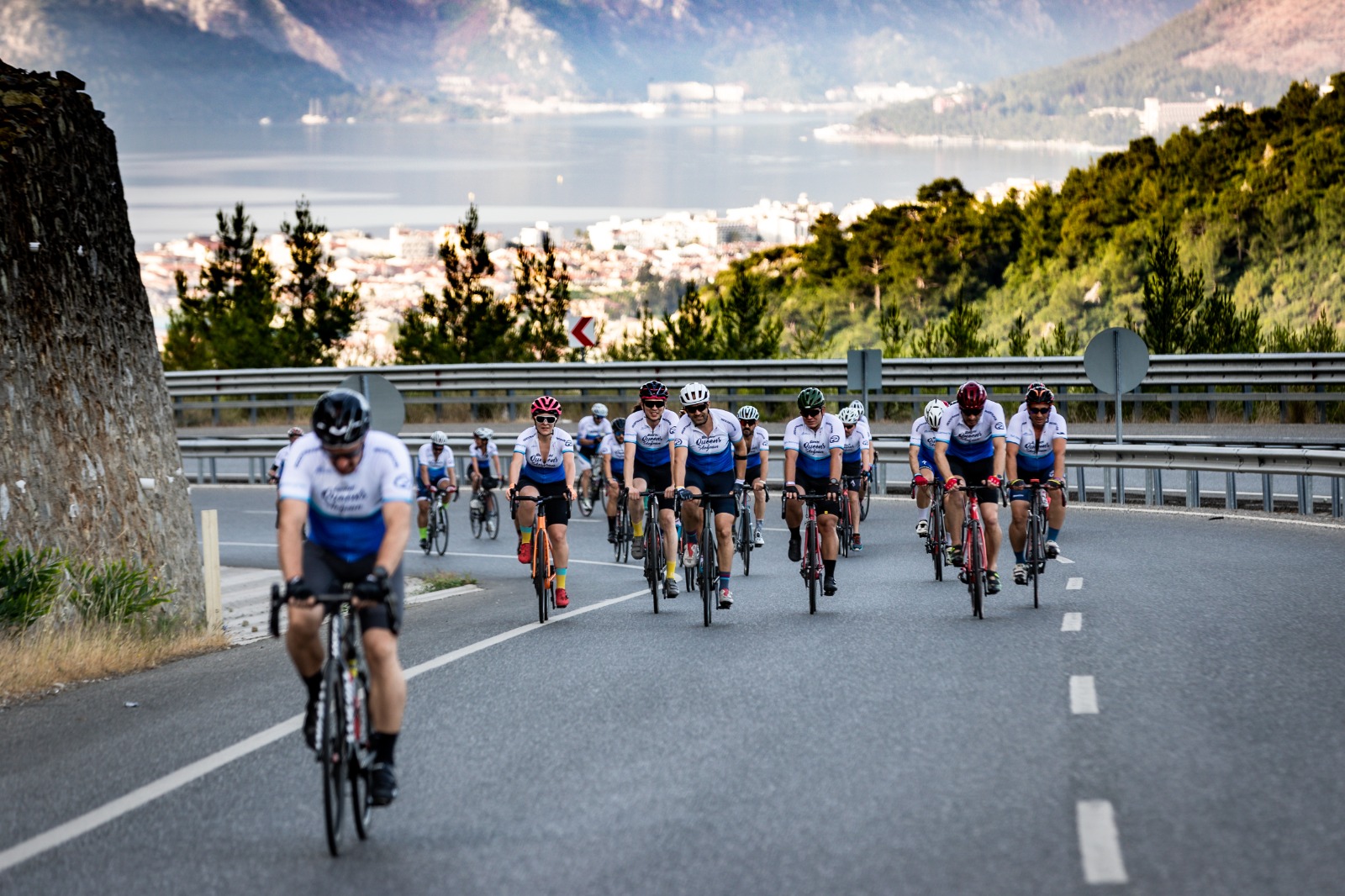 Double hosting of cycling events in Bodrum during May

Bodrum hosted two international cycling events in May. The Halicarnassus Gran Fondo International Bicycle Race took place in Bodrum on 15 May, and the UCI City Mountainbike Eliminator Cup Muğla Race was also held, with tracks established in Bodrum Municipality Square and a part of the bazaar. TGA hosted members of the press, athletes and opinion leaders at both events. Great interest in Türkiye at the ATM Fair

The Arabian Travel Market (ATM), one of the most important tourism fairs for the Middle East market, was held in Dubai, United Arab Emirates between 9-12 May. With the impact of the pandemic subsiding, attendance at the fair was high and there was intense interest from visitors in the Turkish stand which featured 35 exhibiting companies and organizations from Türkiye. 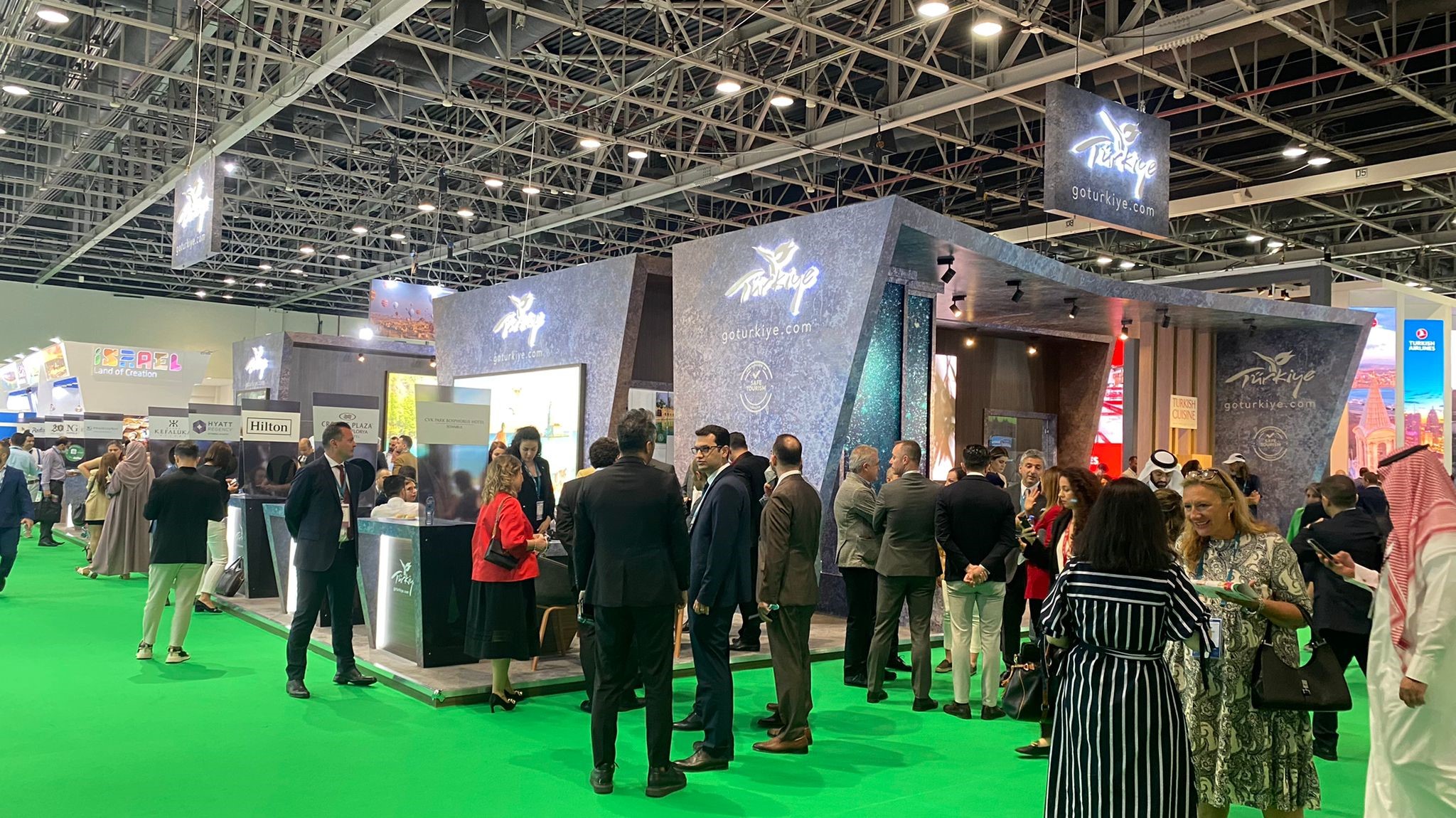 At the Cannes Film Festival between 17-28 May, Türkiye was presented under the coordination of the Ministry of Culture and Tourism General Directorate of Cinema, Paris Culture and Promotion Consultancy, the Turkish Tourism Promotion and Development Agency and the International Bosphorus Cinema Association. During the “Producers Network” event, held at the established Türkiye stand, various treats were offered to visitors as an experience of Turkish tastes. The IMEX Fair, one of the world’s leading tourism organizations, was held in Frankfurt, Germany between 31 May and 2 June. 2022. Twenty-four participating companies and organizations were featured at the Türkiye stand, prepared under the coordination of TGA and the Berlin Consultancy of the Ministry of Culture and Tourism. Türkiye also became the sponsor of “Carbon Offset” at the IMEX Fair this year. TGA also attended the two-day ICCA Association Expert Seminar, held prior to the IMEX Fair, to strengthen business relations with global tourism professionals, to follow sectoral trends, and to promote Türkiye’s MICE destinations. Following the signing of the Destination Partnership Agreement with the International Congress and Conventions Association (ICCA), of which TGA is a member, Türkiye became an ICCA-European Destination Partner. This status, held by only two other European destinations, is expected to greatly increase the number of international congresses and fairs held in the country. During the month of May, TGA participated in the Costa Brava, Sea Trade and Med Cruise congresses and fairs, to further promote cruise tourism and ports in Türkiye. During the events, Türkiye’s cruise tourism strategy was conveyed to international stakeholders and opportunities for future cooperations were evaluated. A total of 154 meetings have been held to date