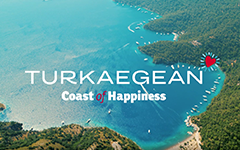 In 54 events organized across 26 cities in Türkiye, the Türkiye Tourism Promotion and Development Agency (TGA) hosted 557 people from 44 countries, of which 246 people were press members and influencers. The highlights of October’s hospitality events and other organizations are listed below:

South Korean TV channel KBS views Türkiye’s caravan routes
TGA hosted the film crew of KBS, one of South Korea’s most watched TV channels, in Türkiye for the filming of caravan and camping routes. Within the scope of the program, the KBS team filmed at many locations in Bursa, Çanakkale, İzmir, Muğla and Antalya in order to show their audiences various routes and activities related to caravans, camping and the outdoors. The group also received detailed information from the Turkish authorities. Heike Kanter, a writer for Barrierefrei, a magazine published in Germany for people with disabilities, was hosted by the TGA between 4-8 October in Antalya. The German journalist visited different historical, natural and cultural points of Antalya, including Aspendos, Tahtalı Mountain, Kaleiçi, and the Antalya Museum in a wheelchair, and shared her experience of traveling in Türkiye as a person with disabilities with the magazine’s readers. Foreign journalists and opinion leaders travel different routes within the scope of 212 Photography İstanbul
A guest group consisting of foreign journalists and opinion leaders came to Türkiye for 212 Photography İstanbul at the invitation of TGA. Coming from 13 countries in Europe, Eastern Europe and the Middle East, the 15-person group was hosted in İstanbul between 5-8 October. The group toured different routes in İstanbul while participating in events organized within the scope of the Festival. 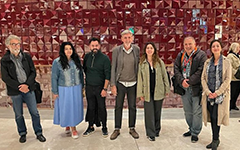 South Korean tour operators discover Türkiye
South Korea’s leading tour operators visited Türkiye between October 5-11 at the invitation of TGA. Within the scope of the program, the 10-person group was hosted in İstanbul, Muğla and Antalya, which are among the leading tourism centres of Türkiye. The guests visited many different historical, natural, and cultural places in the three cities and experienced many famous tastes of Turkish cuisine. Şanlıurfa and Mardin host American journalist Bob Ecker
TGA hosted Bob Ecker, a writer for the US newspaper Napa Valley, in Türkiye between October 5-12. Within the scope of the hospitality program, Mr. Ecker visited Karahantepe and Göbeklitepe in Şanlıurfa and received detailed information from the authorities regarding the excavations. During his trip to Türkiye, the author also visited the historical, natural, and cultural sites of İstanbul and Mardin. 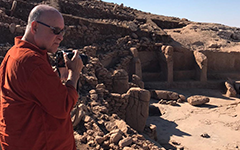 TGA hosted the shooting team of IHQ, one of South Korea’s leading production companies, in Türkiye between October 5-11. The company, which has signed many productions that are closely followed in Korea, selected Türkiye for the filming location of one of their most popular reality shows. İstanbul and Nevşehir hosted the week-long filming. Members of the press from Europe and the Turkic Republics attended the 4th International Gastro Afyon Taste Festival as guests of the TGA and were hosted in Türkiye between October 6-10. Within the scope of the hosting program, the group of eight journalists were hosted in Eskişehir and Kütahya as well as Afyon, the site of the Festival. The group sampled many dishes specific to Turkish cuisine at the Gastro Afyon Flavour Festival, and also toured the historical, natural and cultural places of the cities on the program. Eight members of the press and opinion leaders from South Korea, United Arab Emirates, Azerbaijan and Uzbekistan visited Türkiye at the invitation of TGA. The group attended the International Adana Taste Festival, hosted between October 6-10. In addition to enjoying the delicious Turkish dishes offered at the
Adana festival, the group visited Mersin within the scope of the hospitality program. Chef Manal Alalem, one of the guests, shared different frames from his trip to Türkiye via his social media accounts, which are followed by nearly four million people. 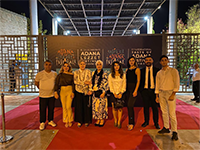 Within the scope of the announcement of the first selection of the Michelin Guide İstanbul 2023, TGA hosted a press and influencer group of 48 people in Türkiye. The members of the group came from France, England, Italy, Israel, Ireland, Germany, Spain, America, the Netherlands and Switzerland and stayed in İstanbul between 10-14 October. The group dined in İstanbul’s Michelin-starred and selected restaurants as part of the hospitality program, while also visiting the city’s historical, cultural and touristic sites. 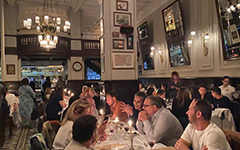 TGA, in cooperation with the German Cycling Federation (BDR), hosted the 12-member cycling team in Muğla between 9-15 October. Guest cyclists from Germany and Austria carried out their training rides on the bicycle routes in Marmaris and Dalaman within the scope of the camp program. Outside the training periods, they toured natural, historical, and cultural sites in the Muğla region. British and Italian influencers in Nevşehir for Cappadocia Ultra Trail

TGA invited influential social media names and content producers from England and Italy to Türkiye within the scope of the Cappadocia Ultra Trail run. The influencer group, hosted between 13-17 October, shared every moment of their experiences in Nevşehir and Cappadocia via their social media accounts. 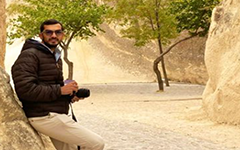 Chi, the famous magazine of Italy, shoots the landscapes of Cappadocia

TGA hosted a team from Chi, one of Italy’s most famous magazines, in Nevşehir between 13-17 October. The Chi team conducted fashion shoots at different points in Cappadocia, while the actors and models in the shoot shared their Cappadocia experiences with followers via their social media accounts. 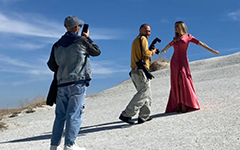 Judy Koutsky, a writer from the US magazine Forbes, was hosted in Türkiye between 13-20 October at the invitation of TGA. Within the scope of the program prepared for her, Ms. Koutsky experienced different nature and adventure tourism activities in Antalya and Cappadocia, including diving, cycling, horse riding and trekking. 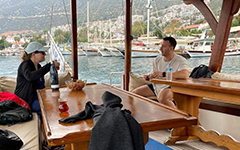 TGA hosted an event in cooperation with the LG U+ mobile operator. The lucky visitors, selected from among the users of the South Korean mobile operator, travelled to Türkiye between October 15-21. The South Korean guests visited İstanbul and Nevşehir, viewing the historical, cultural and touristic sites in both cities, and had the opportunity to experience various flavours of Turkish cuisine. Foreign press members follow the ‘traces of civilizations’ in Anatolia

A group of 11 members of the press visited Türkiye upon the invitation of TGA and were hosted in Tokat, Çorum and Amasya between October 17-21. The group’s members, hailing from Romania, Bulgaria, Serbia, Uzbekistan, Azerbaijan, Kyrgyzstan and Kazakhstan, visited many historical and cultural points in the three cities within the scope of the program, following the traces of Anatolian civilizations to date. 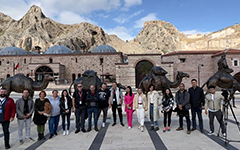 American journalists on a vineyard route in the TurkAegean

Members of the press from the United States and Canada were hosted by the TGA in Türkiye between 17-23 October. Within the scope of Türkiye’s TurkAegean promotional campaigns, the group of journalists travelled along a grape production and vineyard route created for them, in İzmir, Manisa, Denizli and Aydın. The group also visited the historical, natural and cultural sites of the cities on the route. 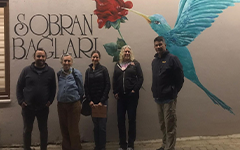 TGA hosted Adamari Lopez, a popular Latin American actress and the screen face of the Telemundo Channel, in Türkiye, along with her filming team. Ms. Lopez and her team shot in İstanbul and Nevşehir between 19-26 October, also interviewing actors in the filming locations of various Turkish series. The show attracted great attention, especially in Latin America. Adamari Lopez, who has more than 8 million followers in social media, shared her shots of İstanbul and Nevşehir with the hashtags ‘İstanbul is the new cool’ and ‘goturkiye’ via her social media accounts. 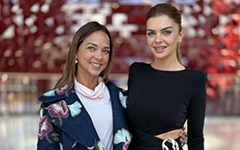 German and Romanian journalists experience the excitement of trekking in Ballıkayalar

A press group from Germany and Romania visited Türkiye between October 20-23 at the invitation of TGA. Hosted in İstanbul, Sakarya and Kocaeli, the guests experienced trekking routes and rock climbing in Kocaeli Ballıkayalar Nature Park as part of a special program created for them. They also canoed in Sapanca Lake and enjoyed the region’s green nature in different activities included in the program. In İstanbul, the invited press group visited the historical, cultural and touristic sites of the city within the scope of the program. The İstanbul leg of the Presidential Yacht Race, now in its third year, took place on the Bosphorus between October 28-30. Twelve journalists from seven countries, hosted by TGA within the scope of the race, observed the race on the Bosphorus from a private boat. In addition, the group visited the historical and touristic sites of İstanbul and had the opportunity to experience Turkish cuisine. TGA participated in the IMEX Exhibition, one of the industry’s most important events, at its Las Vegas location in the USA between 11-13 October. At the Fair, TGA officials conducted presentations related to the promotion of Türkiye, and also informed visitors and industry professional about the sustainable approaches adopted by Türkiye and the MICE sector. TGA at IGTM, the world’s most important golf tourism fair

TGA participated in the International Golf Travel Market (IGTM), one of the most important golf tourism fairs worldwide. The Fair took place in Rome between October 17-20. During the event, TGA officials held more than 50 meetings with tour operators, golf press and golf event organizers from around the world while providing detailed information regarding golf tourism and facilities in Türkiye. TGA, which is one of the supporters of the Cappadocia Ultra Trail run held between October 13-16 in the UNESCO World Heritage Site Cappadocia, ensured that elite athletes, sector pioneers and press members were hosted through works carried out within the scope of the run, while ensuring high interaction with communication activities conducted via social media.

TGA hosted athletes participating in the races within the scope of the Sea to Sky 2022 event, which took place between 19-22 October. The races, which started from the coast of Kemer in Antalya and concluded at the summit of Tahtalı Mountain, were followed with great excitement by motorsport enthusiasts. TGA participated in the Renaissance Luxury Travel and Lifestyle WorkShop held in Paris, France on October 6. At the event, which is also a special club for leaders in the luxury travel and event industry, TGA officials held one-on-one meetings with tourism professionals as well as with companies operating in the luxury tourism and MICE sector in France and Europe. During the event, visitors were also informed in detail on Türkiye’s place and work in the fields of luxury tourism and MICE. A total of 293 meetings held to date