In 44 events organized across 20 cities in Türkiye, the Türkiye Tourism Promotion and Development Agency (TGA) hosted 505 people from 36 countries, of which 159 people were press members and influencers. The highlights of September’s hospitality events and other organizations are listed below: Foreign media members share the excitement of the Vineyard Festival in Ürgüp
Hosted as guests of TGA, a group of press members visited Ürgüp from 8 to 12 September. The group included media members from South Korea, Kazakhstan, Kyrgyzstan, Malaysia and Qatar, and they toured several of the natural, cultural and historical sites in Cappadocia, which has a surreal landscape dotted with fairy chimneys. The group also participated in the International Ürgüp Vineyard and Balloon Festival, held for the 50th time this year. Influential social media figures from Canada were hosted by TGA in İstanbul between 8-13 September. Within the scope of hospitality events organized to highlight the richness of İstanbul, especially in the fields of culture and gastronomy, guests experienced many of the city’s privileges in various venues. The influencers recorded every moment of their İstanbul experience and shared them with followers of their social media accounts. Press members from Sweden and Denmark golf on Antalya courses

Invited to Türkiye by TGA, members of the Swedish and Danish media were hosted in Antalya between 11-15 September for a golf experience. In addition to golfing on courses in Antalya, which hosts golf enthusiasts from around the world throughout the year, the group explored different aspects of Antalya by visiting important historical, natural and cultural sites in the region within the scope of a specially prepared program. Avneet Kaur, one of India’s most prominent social media figures, with 32.7 million followers, visited Türkiye between 11-17 September by special invitation from TGA. Hosted in İstanbul and Antalya within the scope of the program prepared for her, Kaur experienced the richness of our country’s culture and gastronomy. Avneet Kaur continuously updated her followers on her Antalya and İstanbul experiences via her social media account. 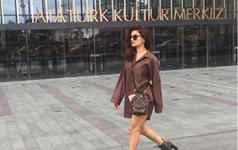 A group of press members from Romania, Serbia, Bulgaria and Bosnia and Herzegovina were invited to Türkiye by TGA. The group toured the Ottoman Capitals between 12-18 September, visiting many historical and cultural sites in Bilecik, Bursa, Edirne and İstanbul within the scope of the Ottoman Capitals hosting program. As part of the cooperation with Jet2Holidays, the second largest tourism company in the UK, members of the British press were hosted in Antalya between 13-19 September. Within the scope of the program, the group visited the important historical, natural and cultural regions of Antalya, explored the city with its distinct aspects, and also had the opportunity to experience various flavours of Turkish cuisine. Press members from around the world visit Türkiye for Contemporary İstanbul

As part of the 17th edition of Contemporary İstanbul, TGA hosted 22 press members from Germany, Italy, USA, UK, South Africa, India, United Arab Emirates, Russia, Austria and Portugal in Türkiye. Within the scope of the hospitality, the guests visited Contemporary İstanbul, exhibiting the most beautiful examples of contemporary art, and discovered the historical, cultural and modern aspects of İstanbul. 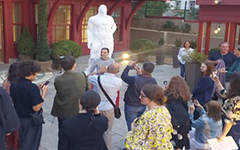 Tour operators from different countries, including Bulgaria, Serbia, Romania, Australia, Austria, Germany and Russia, were hosted in Çanakkale between 15-19 September at the invitation of TGA. Guest tour operators made exploratory dives within the Gallipoli Historical Underwater Park, which was opened to visitors by the Gelibolu Historical Area Directorate, while also visiting the Mehmetçik Lighthouse Museum, the Çanakkale Epic Promotion Centre and the Kilitbahir Observation Terrace. 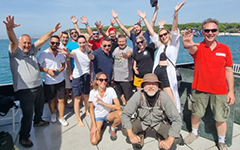 TGA hosted members of Europe’s leading broadcasting organizations at the Troy Culture Route Festival (Troya Kültür Yolu Festivali), held in Çanakkale within the scope of the “Türkiye Culture Route Festivals (Türkiye Kültür Yolu Festivalleri)” organized by the Ministry of Culture and Tourism. Between 15-20 September, the group participated in many of the Festival events and visited the important natural and cultural beauties of Çanakkale. The journalists also interviewed artists participating in the Festival. 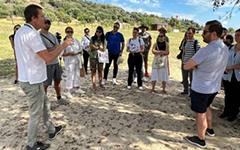 Emmy Award-winning presenter Darley Newman and three-time Emmy-winning photographer Greg Barna were invited to Türkiye by TGA for the shooting of the highly watched Public Broadcasting Service (PBS) program Travels with Darley. PBS is one of the most important channels in the United States. During the filming, the crew toured many different points in.İstanbul, Nevşehir, Antalya, İzmir and Şanlıurfa between 16-27 September. The Türkiye footage will be broadcast as two episodes of Travels with Darley. Sports Illustrated’s Thomas Bedell discovers golf courses in Antalya
Thomas Bedell, a writer for Sports Illustrated magazine, one of the leading sports publications in the USA, visited Antalya between 19-23 September at the invitation of TGA. Bedell, who experienced the golf courses in the region and received detailed information about the tracks, also visited important historical, natural and cultural sites in the region within the scope of the program created for him.

Fashion and culture writers in Türkiye for Iconic İstanbul

Leading fashion and cultural writers from South Korea, Japan, Germany, the Netherlands, Switzerland, Denmark and Poland were invited to Türkiye by TGA. Within the scope of the hosting program between September 19-24, the guest writers were hosted in many different venues of İstanbul that demonstrate the harmony with gastronomy and fashion. The group was also introduced to Turkish designers. 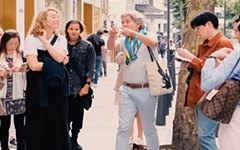 Within the scope of TGA’s cooperation with the Turkish Airlines (THY) Milan Office, a twelve-person team from Italy carried out underwater documentary shooting and exploratory dives in Çanakkale. Hosted in Türkiye between 19-24 September, the team made exploratory dives at six points in the Gallipoli Historical Underwater Park. They also filmed extensively for the creation of an underwater documentary on the region. Within the scope of the hosting program, the group also visited the Çanakkale Mehmetçik Lighthouse Museum, Çanakkale Epic Promotion Centre and Kilitbahir Observation Terrace. 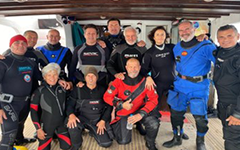 TGA hosted 48 elite-level athletes from 13 countries including Germany, England, France, Australia and Egypt for the Lycian Way Ultra Marathon in Türkiye. The athletes, hosted in Antalya between 21-26 September to participate in the Ultra Marathon, also visited the ancient cities around the Lycian Way and discovered the historical and cultural richness of the region. European Influencers experience the excitement of the Bosphorus Cup in İstanbul

Influential social media figures from Germany, Denmark, Spain and Norway visited Türkiye at the invitation of the TGA to view the Bosphorus Cup races, one of the most prestigious sailing organizations in Türkiye. The Influencers, hosted in İstanbul between 22-26 September, shared both the excitement of the races and their different experiences in İstanbul via posts and broadcasts. TGA hosted a group of journalists from Azerbaijan, Kyrgyzstan, Kazakhstan and Uzbekistan at the International Konya Mystic Music Festival, which was included in the scope of the Türkiye Culture Route Festival this year. Within the scope of the reception, the journalists had an opportunity to listen to many prominent names in mystical music at different concerts during the Festival program. The group also visited many different historical and cultural venues in Konya. 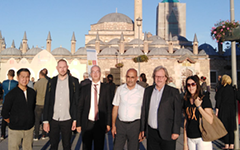 Activities are ongoing within the scope of the cooperation agreement signed in January by TGA with GSTC, one of the world’s leading accreditation bodies in the field of sustainability. TGA officials attending the Cappadocia University Sustainable Tourism Hotel Workshop on 5-6 September 2022 provided detailed information regarding the Green Tourism Sustainable Program and TGA’s efforts to adopt and disseminate the sustainability vision in the tourism sector. 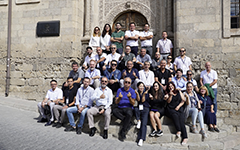 TGA participated in the İstanbul Regional Airport Workshop (İstanbul Regional Airports Event), held under the leadership of İGA İstanbul Airport, in which representatives of 24 regional airports in Europe were hosted in İstanbul. In the presentation, with participation by TGA Country Marketing Manager Yıldırım Uğursoy and Country Marketing Assistant Manager Serkan Yılmazer, the position and importance of Türkiye and İstanbul in the tourism sector were discussed, and attendees were informed regarding TGA’s effective work to improve the promotion of the country and expand its share in the market. 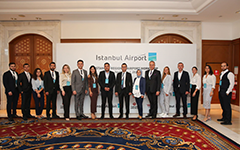 TGA participated in the Destination Wedding Planners Congress (DWPC) held in Bali between 27-29 September and attended by the leading wedding organizers of the destination wedding industry. Within the scope of the event, TGA officials held one-on-one meetings with the sector’s senior organizers and planners via briefings highlighting Türkiye’s location and its richness. 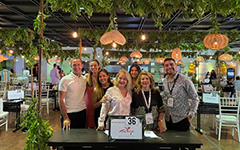 A total of 268 meetings held to date